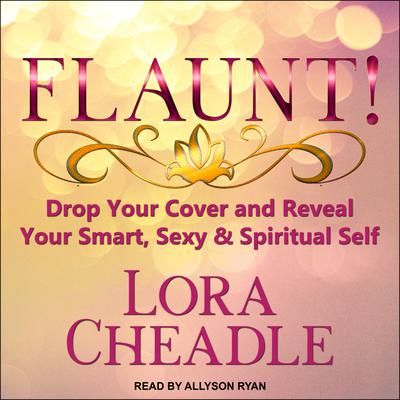 Drop Your Cover and Reveal Your Smart, Sexy & Spiritual Self

Attractive woman, savvy career professional, devoted wife and mother, caring daughter—the list of roles women play is endless. And while women may have chosen and cherish these roles, that doesn't mean they may not occasionally—or more than occasionally—chafe.

What is there behind these roles? Lora Cheadle, who felt trapped in the successful lawyer persona she'd crafted, believes there is joy, laughter, and self-love based not on performing roles perfectly but on being oneself, physically, emotionally, and spiritually. While she used the principles of burlesque to peel away the layers she'd built up around her core self, she also found that the laughter and parody inherent in burlesque could liberate women from their wounds, fears, and inhibitions even if they don't set foot on an actual stage.

While Flaunt! dives deep into how and why listeners got where they are, it quite literally dances through these realizations and uses laughter, play, and storytelling to break free. Listeners learn to cultivate the kind or rock-solid self-worth that cannot be undone by criticism or failure. Cheadle calls herself a life choreographer because she has helped herself, and now helps others dance through their lives, sometimes with well-plotted steps and other times with improvisation but always, always with self-love, sass, and joy.

Allyson Ryan is a native New Yorker whose diverse talents have led to a career in voice-over, theater, TV, commercials, and films. Narrating for several years now, she has an AudioFile Earphones Award for the audiobook On the Divinity of Second Chances by Kaya McLaren. She is also a 2017 Society of Voice Arts and Sciences Voice Arts® Award nominee. She can be heard in commercials, animated shows, and video games, and seen as "Mom" in several national commercials.