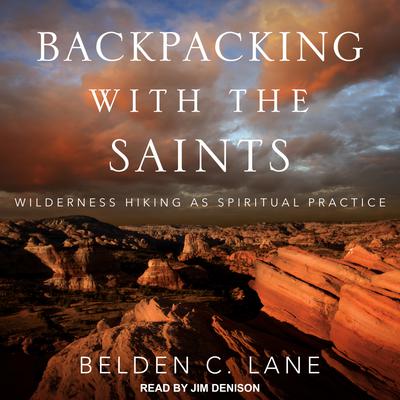 Backpacking with the Saints (Digital Audiobook)

Carrying only basic camping equipment and a collection of the world's great spiritual writings, Belden C. Lane embarks on solitary spiritual treks through the Ozarks and across the American Southwest. For companions, he has only such teachers as Rumi, John of the Cross, Hildegard of Bingen, Dag Hammarskjöld, and Thomas Merton, and as he walks, he engages their writings with the natural wonders he encounters, demonstrating how being alone in the wild opens a rare view onto one's interior landscape, and how the saints' writings reveal the divine in nature.

The discipline of backpacking, Lane shows, is a metaphor for a spiritual journey. Just as the wilderness offered revelations to the early Desert Christians, backpacking hones crucial spiritual skills: paying attention, traveling light, practicing silence, and exercising wonder. Lane engages the practice not only with a wide range of spiritual writings, but with the fascination of other lovers of the backcountry, from John Muir and Ed Abbey to Bill Plotkin and Cheryl Strayed. In this intimate and down-to-earth narrative, backpacking is shown to be a spiritual practice that allows the discovery of God amidst the beauty and unexpected terrors of nature. Adoration, Lane suggests, is the most appropriate human response to what we cannot explain, but have nonetheless learned to love.

Jim Denison is an AudioFile Earphones Award winner and a Society of Voice Arts and Sciences (SOVAS) Voice Arts Award nominee. He has experience as an actor on a variety of television shows and movies, appearing on Netflix, HBO, the National Geographic Channel, Investigation Discovery, and other networks, as well as appearances and voice-overs in regional and national television and radio ads.

A Florida native, he has worked and traveled in many locations within the United States and abroad. For five years he hosted religious programs broadcast from several Caribbean radio stations. He changed careers to voice-over and audiobook narration after forty years of working with Christian churches in Florida, Texas, Trinidad and Tobago, Alabama, South Carolina, Maryland, and Kentucky. Jim and his wife of over thirty-five years, Renee, currently reside in southern Indiana near Louisville, Kentucky. They have two grown daughters. He holds two master's degrees and a doctorate.