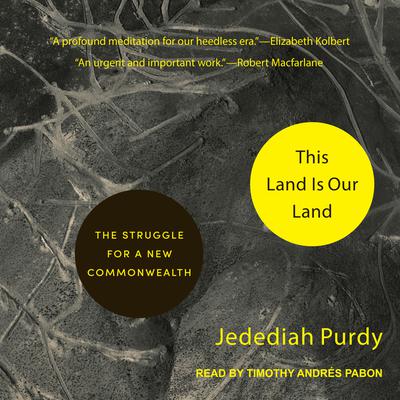 This Land Is Our Land (Digital Audiobook)

The Struggle for a New Commonwealth

Today, we are at a turning point as we face ecological and political crises that are rooted in conflicts over the land itself. But these problems can be solved if we draw on elements of our tradition that move us toward a new commonwealth—a community founded on the well-being of all people and the natural world.

From the coalfields of Appalachia and the tobacco fields of the Carolinas to the public lands of the West, Jedediah Purdy—one of our finest writers and leading environmental thinkers—shows how the land has always united and divided Americans, holding us in common projects and fates but also separating us into insiders and outsiders, owners and dependents, workers and bosses. Expropriated from Native Americans and transformed by slave labor, the same land that represents a history of racism and exploitation could, in the face of environmental catastrophe, bind us together in relationships of reciprocity and mutual responsibility.

This may seem idealistic in our polarized time, but we are at a historical fork in the road, and if we do not make efforts now to move toward a commonwealth, Purdy warns, environmental and political pressures will create harsher and crueler conflicts—between citizens, between countries, and between humans and the rest of the world.

Timothy Andres Pabon is an actor and Spanish and English voice-over artist/audiobook narrator from Washington D.C. He has over 140 books on Audible.com, one of which was nominated for a 2015 Society of Voice Arts and Sciences Award and another which was awarded an AudioFile Earphones award as part of an ensemble audiobook cast in 2014. His voice-over clients include Gabrielle Giffords, Hillary Clinton, The Sierra Club, NBC, and the 10-episode series Chasing Che on National Geographic. He has been seen on House of Cards seasons 3 and 4 as Mark, a White house press correspondent. He has also been a costar on HBO's acclaimed series The Wire opposite country music legend Steve Earl. As a stage actor he has worked Off-Broadway at the June Havoc Theatre, and his regional credits include Center Stage, the Shakespeare Theatre, Arena Stage, The Hippodrome, Olney Theatre, Rep Stage, and GALA Hispanic Theatre. Tim is a proud father of two children, and a member of AFTRA/SAG and Actor's Equity.