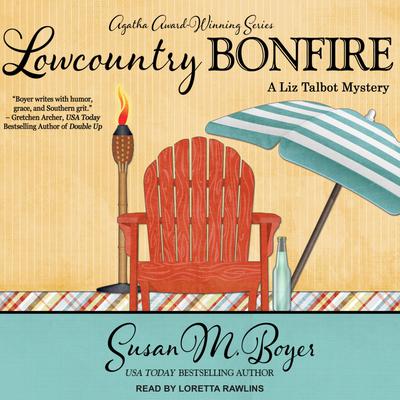 Private Investigators Liz Talbot and Nate Andrews have worked their share of domestic cases. So when Tammy Sue Lyerly hires them to find out what her husband is hiding, they expect to find something looney but harmless. After all, this is the guy who claims to have been a DEA agent, a champion bull rider, and a NASCAR driver. But when he turns up dead the morning after Liz and Nate deliver incriminating photos, Tammy Sue becomes the prime suspect.

Questioning the truth of Zeke Lyerly's tall tales, Liz and Nate race to uncover small-town scandals, long buried secrets, and the victim's tumultuous past to keep Tammy Sue out of jail and the case from going up in flames.

Loretta Rawlins brings the calm, steady balance from her dual career as actor and inspiring yoga teacher to her love of narrating audiobooks. Growing up in the abundantly green Willamette Valley in the great state of Oregon, she has lived and studied across the U.S. and currently calls Atlanta, Georgia, home. Her voice can be heard for major multi-national companies such as IBM, Home Depot, and Turner Broadcasting. She has narrated over sixty books, with some of her favorites being mysteries and inspirational nonfiction. Loretta appears regularly on the professional stage in and around Atlanta and is an Artistic Family Member of the well-respected Dad's Garage Improv Theatre, as well as being seen in various film and television productions, including AMC's The Walking Dead and ABC's Nashville.