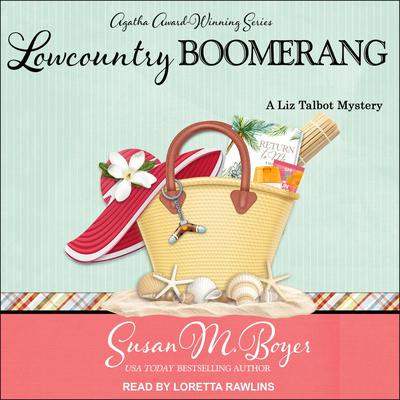 Private investigators Liz Talbot and Nate Andrews are all set to enjoy some quality time on the beach. That's until they get the news about Darius. Darius DeAndre Baker, star of the hit TV show, Main Street USA, has had enough of the Hollywood highlife. After ten years of visiting everyone else's hometown, he returns to his own—Stella Maris, South Carolina.

But the moving trucks have barely unloaded when Trina Lynn Causby, Darius's high school girlfriend, turns up dead, and the entire town reels as Darius is arrested.

Despite the mounting evidence against him, Liz and Nate believe Darius is innocent. They dig through a scandalously long list of suspects, including Darius's three ex-wives—who have all arrived in Stella Maris—and his love child with Trina Lynn.

But Trina Lynn led a complicated life. She had at least one stalker and two suitors—one with a jealous wife who recently made a deliciously outrageous scene when Trina Lynn turned up at a charity ball.

As the danger mounts, Liz and Nate race to find a killer and clear Darius's name—and keep him alive.

Loretta Rawlins brings the calm, steady balance from her dual career as actor and inspiring yoga teacher to her love of narrating audiobooks. Growing up in the abundantly green Willamette Valley in the great state of Oregon, she has lived and studied across the U.S. and currently calls Atlanta, Georgia, home. Her voice can be heard for major multi-national companies such as IBM, Home Depot, and Turner Broadcasting. She has narrated over sixty books, with some of her favorites being mysteries and inspirational nonfiction. Loretta appears regularly on the professional stage in and around Atlanta and is an Artistic Family Member of the well-respected Dad's Garage Improv Theatre, as well as being seen in various film and television productions, including AMC's The Walking Dead and ABC's Nashville.