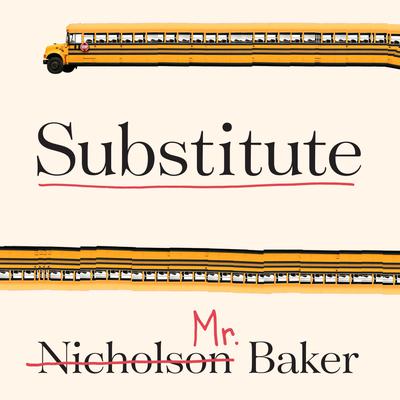 Going to School With a Thousand Kids

In 2014, after a brief orientation course and a few fingerprinting sessions, Nicholson Baker became an on-call substitute teacher in a Maine public school district. He awoke to the dispatcher's five-forty a.m. phone call and headed to one of several nearby schools; when he got there, he did his best to follow lesson plans and help his students get something done. What emerges from Baker's experience is a complex, often touching deconstruction of public schooling in America: children swamped with overdue assignments, overwhelmed by the marvels and distractions of social media and educational technology, and staff who weary themselves trying to teach in step with an often outmoded or overly ambitious standard curriculum. In Baker's hands, the inner life of the classroom is examined anew as the author and his pupils struggle to find ways to get through the day. Baker is one of the most inventive and remarkable writers of our time, and Substitute, filled with humor, honesty, and empathy, may be his most impressive work of nonfiction yet.

A veteran voice artist, Tom Zingarelli has produced and narrated many audiobooks in the last several years. He has also recorded books for the Connecticut State Library for the Blind and Physically Handicapped. His voice was featured on the popular PBS children's television program Between the Lions and in the off-Broadway production of Ruthless, the Musical. Commercially, Tom has recorded for the Connecticut Department of Health, the American Heart Association, and several corporations and universities. He is the on-camera and voiceover star of the ten-part video series Greatest American Tall Tales and Legends, about legendary American heroes like Johnny Appleseed and Davy Crockett, popular in schools and libraries nationwide. Tom is also the voice of Maurice the mouse (and his ninety-eight grandmice) in the children's interactive audiobook series Maurice's Valises. He is a veteran actor of many live radio re-creations, including Lights Out, Suspense, and Johnny Dollar, and he is a frequent reader for dramatic and literature programs. Recently, Tom became an audio describer for the blind and visually impaired of Broadway theater through Describe!, a program of the Healing Arts Institute, and for the Yale Repertory Theater.