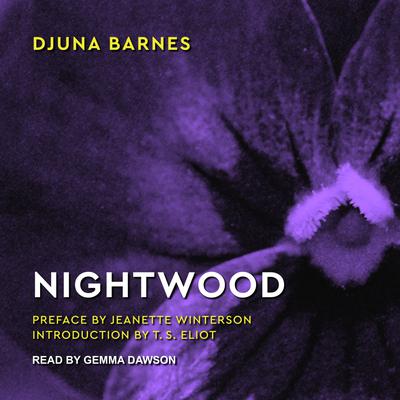 Nightwood, Djuna Barnes's strange and sinuous tour de force novel unfolds in the decadent shadows of Europe's great cities, Paris, Berlin, and Vienna—a world in which the boundaries of class, religion, and sexuality are bold but surprisingly porous.

The outsized characters who inhabit this world are some of the most memorable in all of fiction—there is Guido Volkbein, the Wandering Jew and son of a self-proclaimed baron; Robin Vote, the American expatriate who marries him and then engages in a series of affairs, first with Nora Flood and then with Jenny Petherbridge, driving all of her lovers to distraction with her passion for wandering alone in the night; and there is Dr. Matthew-Mighty-Grain-of-Salt-Dante-O'Connor, a transvestite and ostensible gynecologist, whose digressive speeches brim with fury, keen insights, and surprising allusions. Barnes's depiction of these characters and their relationships has made the novel a landmark of feminist and lesbian literature.

Gemma Dawson is a classically trained British actress born and raised in London, England. She graduated from the American Academy of Dramatic Arts in New York City, and went on to become one of their prestigious company members. She has remained in NYC, where she now works as an actress and voice-over artist. Gemma has acted on stage Off-Broadway as well as back home in the U.K. She has lent her voice to documentaries, television shows, commercials, and major motion pictures. She has narrated over sixty audiobooks and approaches a title in the same way she would any stage role, with the objection of bringing the story and characters to life with authenticity, accuracy, and imagination.