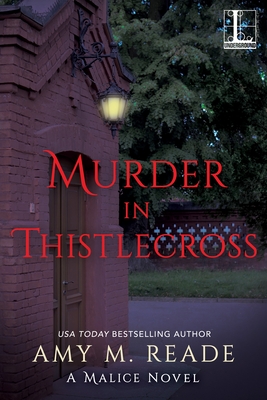 Murder in Thistlecross (A Malice Novel #3)

The emerald hills and violet valleys of Wales seem the ideal place to start over after murder—and divorce—shattered Eilidh’s life in the Scottish Highlands. But within the stone walls of an ancient castle, a family’s dark, violent past threatens much more than her newfound tranquility . . .

For the past two years, Eilidh has called the quaint Welsh village of Thistlecross home, embracing her new life as estate manager of a restored fifteenth-century castle. But the long-anticipated arrival of her employer’s three estranged sons and their wives transforms Gylfinog Castell from a welcoming haven to a place seething with dangerous secrets. When the escalating tensions culminate in murder, Eilidh must sift through a castle full of suspects both upstairs and downstairs. She can trust no one as she follows a twisting maze of greed and malice to ferret out a killer who’s breaching every defense, preparing to make Eilidh the next to die.

“Danger, mystery, a brave but resilient heroine, and a hero at her side, coupled with a house that is almost a character in its own right: these classic gothic romance traits are all to be found in Amy Reade’s debut novel.”
—heroesandheartbreakers.com

USA Today bestselling author Amy M. Reade is a former attorney who now writes full-time from her home in southern New Jersey, where she is also a wife, a mom of three, and a volunteer in school, church, and community groups. She loves cooking, traveling, and all things Hawaii and is currently at work on the next novel in the Malice series. Visit her on the web at www.amymreade.com or at www.amreade.wordpress.com.
Loading...
or support indie stores by buying on