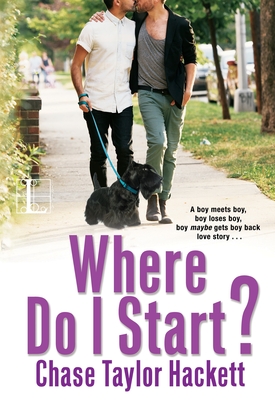 Fletcher Andrews never believed in promises. Or monogamy. Or love. When you’re tall and gorgeous, New York City is one big all-you-can-eat buffet of hot young actors, models, and baristas. Even when living happily with Roger, his sweet, sexy violinist boyfriend, Fletch can’t resist an occasional taste. Too bad you don’t know what you’ve got until it’s thrown you out for cheating with half the cast of Disney on Ice.

Two years and a chance meeting later, Fletch desperately wants Roger back. Roger’s new boyfriend, Jeff, will do anything to stop that from happening. But Fletch has a plan to make amends. And with a little help from friends, colleagues—even Roger’s Scottish terrier, Haggis—they might find that the love you don’t believe in can sweep you right off your feet . . .

Chase Taylor Hackett was raised on a farm in the Midwest—far from his current home in New York City. He has written most of his professional life, nearly all of it in musical theatre, culminating in a show opening on Broadway. Unfortunately, two weeks later that show closed on Broadway.

Not long ago, he woke up one morning with a couple characters in his head, who, try as he might to convince them, refused to become a musical comedy. He wondered if he could possibly work them up into a novel, but, never having tried to write one before, he didn’t have a clue where to begin.

And thus: Where Do I Start?

He lives in upper Manhattan with his partner Travis, and a Scottish terrier named Watson.
Loading...
or support indie stores by buying on