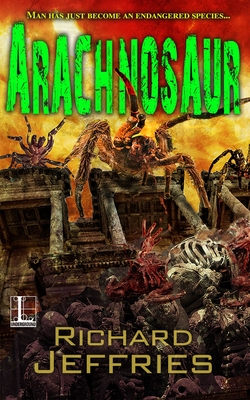 After his superior officers are killed in action, Corporal Josiah Key assumes command of the 3rd Battalion, Marine Raiders. In the tiny village of Shabhut, Yemen, while trying to put the blast on ISIS forces, an even deadlier enemy emerges: ancient, unreasoning creatures who tear into both U.S. troops and terrorists without mercy, leaving brutally dismembered corpses in their wake.

They are known as the Idmonarchne Brasieri, giant prehistoric spiders roused from millennia-long slumber by power-mad terrorists. These aptly-named ‘Arachnosaurs’ are hungry. They’re angry. And they have declared war against all of humanity . . . whose days might just be numbered unless Key and his unit can stop them.

Richard Jeffries holds a degree in Creative Writing, obtained before he went to work for American intelligence. He has seen the world—and things in it—which inspired the writing of these novels. Now retired from covert ops, Jeffries divides his time between rural Connecticut and London. In his spare time he pursues his lifelong interest in Kung Fu and classical piano.
Loading...
or support indie stores by buying on