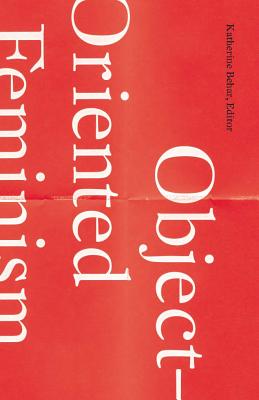 The essays in Object-Oriented Feminism explore OOF: a feminist intervention into recent philosophical discourses—like speculative realism, object-oriented ontology (OOO), and new materialism—that take objects, things, stuff, and matter as primary. Object-oriented feminism approaches all objects from the inside-out position of being an object too, with all of its accompanying political and ethical potentials.

This volume places OOF thought in a long history of ongoing feminist work in multiple disciplines. In particular, object-oriented feminism foregrounds three significant aspects of feminist thinking in the philosophy of things: politics, engaging with histories of treating certain humans (women, people of color, and the poor) as objects; erotics, employing humor to foment unseemly entanglements between things; and ethics, refusing to make grand philosophical truth claims, instead staking a modest ethical position that arrives at being “in the right” by being “wrong.”

Seeking not to define object-oriented feminism but rather to enact it, the volume is interdisciplinary in approach, with contributors from a variety of fields, including sociology, anthropology, English, art, and philosophy. Topics are frequently provocative, engaging a wide range of theorists from Heidegger and Levinas to Irigaray and Haraway, and an intriguing diverse array of objects, including the female body as fetish object in Lolita subculture; birds made queer by endocrine disruptors; and truth claims arising in material relations in indigenous fiction and film. Intentionally, each essay can be seen as an “object” in relation to others in this collection.

Katherine Behar is an interdisciplinary media and performance artist and assistant professor of new media arts at Baruch College, City University of New York. She is the author of Bigger than You: Big Data and Obesity, and the co-author, with Emmy Mikelson, of And Another Thing: Nonanthropocentrism and Art. Her art publications include Katherine Behar: E-Waste.

"Taking on object-oriented ontologies and speculative realism, the authors of these essays are not shy in reestablishing feminist theory as a primary resource for thinking about objects, things and environments. The editor, Katherine Behar, offers a brilliant introduction to object-oriented feminism and the encounter it stages with  current philosophical trends."—Patricia Ticineto Clough, author of Autoaffection and coeditor of Beyond Biopolitics

"Object-Oriented Feminism will be of particular interest for readers in feminist theory, philosophy and poststructuralism as they intersect with curatorial and art practices, and thus also being interesting for artists, curators and cultural workers navigating their ways in the worlds of theory and philosophy."—Identities: Journal for Gender, Politics and Culture