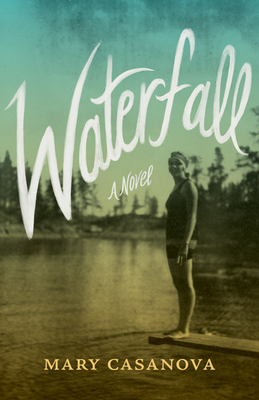 Trinity Baird’s hope for independence is tenuous, especially when her family has the final say—and the power to lock her away

In her third Rainy Lake historical drama, Mary Casanova takes us back to pristine and rugged northern Minnesota. It’s 1922, women have won the right to vote, and Trinity Baird is of age. But at 21, and after nearly two years at Oak Hills Asylum, she returns to her family’s island summer home with her self-confidence in tatters and her mind seared by haunting memories. Her parents are oblivious to what they have put her through and instead watch their daughter for the least sign of defiance. Trinity struggles to be the “respectable” young woman her parents (especially her mother) demand, so that she can return to her independent life studying art and painting in Paris. She never wants to go back to Oak Hills, where they “treat” hysterical, i.e., unconventional, young women.

With enough talent and ambition to be accepted into the Sorbonne, Trinity had hoped she would be well on her way as an artist by now. On the island, she returns to what sustains her: painting. While her love for this beautiful place is deep and abiding, the few months ahead present a near-impossible task: recover the strong sense of self she’s nearly lost during her time away, while holding off her powerful family’s efforts to coerce her into submission. When her parents arrive on Baird Island, her father brings along a promising young architect to help with plans to build new guest cabins. Trinity suspects her parents are trying to introduce yet another marriage prospect. Or might she have found an ally?

Informed by historical figures, by the burgeoning growth of women’s rights in the early twentieth century, and the complicated issue of mental illness and how “difficult” women were silenced, Waterfall offers a compelling story of an inspired, ambitious, and soulful young woman’s fight to find her way.


Praise For Waterfall: A Novel…

"Waterfall is a thoughtful and beautifully written story about a young woman struggling to find her independence. Set in the 1920s, the book gives us glimpses of the issues of the day, which remain important now—women’s rights, anti-Semitism, treatment of mental illness, lynchings. A deeply satisfying read, it shows that one can go over the waterfall and still survive."—Mary Logue, author of The Streel and the Claire Watkins mystery series

"Waterfall is a moving story about healing against all odds. The novel recognizes the seemingly small yet profound movements beneath the surface of everyday life and shows how significant events happen even when you hardly notice them . . . all written in a beautifully crisp style."—Ola Larsmo, author of Swede Hollow

"With its glorious setting contrasting with the realities of the era, Waterfall details darker aspects of the Roaring Twenties, but also celebrates the reemergence of an individual spirit."—Foreword Reviews

"If you enjoy an exquisitely drawn natural setting, have an interest in the social mores of the 1920s and the issues of women then and now, pick up a copy of Waterfall. It is a compelling read and will provide an excellent springboard for book group discussion."—Eye 2 Eye

"A refreshing and satisfying read."—Star Tribune

"Waterfall is most compelling in its portrait of the Baird family, especially the relationships of the mother and the two adult daughters/sisters. Without milking the reader’s sympathy, Casanova shows each woman’s emotional status in the family, their jealousies and traumas, and the repressive social conventions that have soured their time together."—Historical Novel Society

"No need to be a young adult to enjoy this story; old adults will find it perfect for a rainy afternoon on the cabin porch. "—Ely Summer Times

"Casanova’s descriptions of Rainy Lake and environs are deeply evocative and keenly felt, as is her sensitivity to the main character's struggle for physical and artistic freedom in an era and an economic strata stultifying for women."—Minnesota Alumni

1. Consider and discuss a ‘woman’s place’ in society in the early 20th century. How does Trinity push the boundaries and demonstrate courage and determination?

2. What are the differences between the diagnosis and treatment of mental illness then and now?

3. How does Trinity’s family wealth act as a contributor to her difficulties? To her successes?

4. This being a story of self-realization, discuss the changes you see in Trinity as the novel unfolds. What precipitates these changes?

5. We see wealth and privilege portrayed alongside poverty and servitude. In what instances do you share Trinity’s discomfort and unease? Why?

6. Consider the environmental concerns of Ernest Oberholtzer/Victor Guttenberg. How were his ideas shaped by his relationship with American Indians?

7. What are Trinity’s main challenges? How does she overcome them?

9. If a romantic relationship continued between Max and Trinity, what kind of hardships and choices might they encounter?

10. Regarding Trinity’s asylum doctor: How were his role and counsel instrumental in her ‘recovery’?

11. Trinity is a young woman ahead of her time in many ways. How does that impact her relationships with her mother and sister? With her fellow Asylum inmates? With Victor, Henry, and Max?