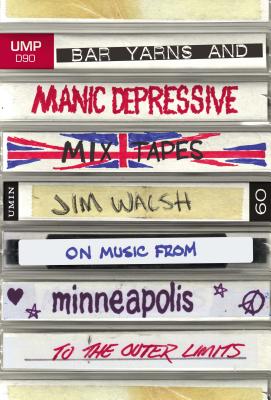 Jim Walsh on Music from Minneapolis to the Outer Limits

Bar Yarns and Manic Depressive Mix Tapes distills thirty delirious, jam-packed years of some of the best music writing ever to come out of the Twin Cities. As a writer and musician, the ever-curious Jim Walsh has lived a life immersed in music, and it all makes its way into his columns and feature articles, interviews and reviews, including personal essays on life, love, music, family, death, and, yes, the manic-depressive highs and lows that come with being an obsessive music lover and listener.

From Minneapolis’s own Prince to such far-flung acts as David Bowie, the Waterboys, Lucinda Williams, Parliament-Funkadelic, L7, the Rolling Stones, the Ramones, U2, Hank Williams, Britney Spears, Elvis Presley and Nirvana, Walsh’s work treats us to a chorus of the voices and sounds that have made the music scene over the past three decades. The big names are here, from Rosanne Cash to Bruce Springsteen to Bob Marley and Jackson Browne, but so are those a little shy of superstardom, like the Tin Star Sisters and Uncle Tupelo, Son Volt, the Gear Daddies, Semisonic, and The Belfast Cowboys.

The book is also a tour (de force) of the Twin Cities' most celebrated music venues past and present, from the Prom Ballroom to Paisley Park to Duffy's. When Walsh isn't celebrating the sheer magic of live music or dreaming to tunes blasting from the car console, he might be surveying the scene with the Hamm's Bear at Grumpy's or the Double Deuce or singing the last night at the Uptown Bar blues. Whether he's dishing dirt with Yoko Ono or digging the Replacements' roots, giving an old rocker a spin or offering a mic to the latest upstart, Jim Walsh reminds us that in the land of a thousand lakes there are a thousand dances, and the music never dies.

Capturing the pure notes and character of the sound of the Twin Cities and beyond, with a keen eye for trends and the telling detail, his book truly is a mix tape of thirty years of unforgettable music.


Praise For Bar Yarns and Manic-Depressive Mixtapes: Jim Walsh on Music from Minneapolis to the Outer Limits…

"Jim Walsh has been the introspective and thoughtful voice of a generation that reenergized Minnesota music and gave it to the world. This is a book about a man in love with music."—Chris Osgood of The Suicide Commandos

"Most mere mortals would have burned out after so many years and so many decibels and late nights, but Jim Walsh is the battery rabbit of the local music scene. For him it really is all about the passion: his contagious joy, awe, and fierce fidelity to the communal spirit are there in everything he writes, and his voice is unmistakable."—Brad Zellar, author of Suburban World: The Norling Photos, Conductors of the Moving World, and House of Coates

"Jim Walsh's Bar Yarns and Manic-Depressive Mixtapes is as much a chronicle of the past few decades of the Minneapolis scene as it is a pitch-perfect memoir of what it means to live for music. A crucial read for anyone who has spent their days and nights tangled in the tether of a song."—Jessica Hopper, author of The First Collection of Criticism by a Living Female Rock Critic

"Jim Walsh’s Bar Yarns and Manic-Depressive Mixtapes is like a cicada come trilling out of the fertile past. Each chapter is a love song of old for the here and now, a desperate season in need of music elixir."—Nicole Helget, author of Summer of Ordinary Ways, The Turtle Catcher, and Stillwater

"Walsh’s writing is musical, rhythmic and tuned, with a throughline of humanity."—MinnPost.com

"Jim Walsh is a true believer: For him, rock ’n’ roll is more than music or culture and becomes religion. Published in Rolling Stone and The Village Voice, the Minnesota writer-musician is a good and heartfelt essayist and memoirist. "—Shepherd Express

"Whether he’s discussing Prince, Springsteen or the Uptown Bar, Walsh is a man and a fan in touch with his feelings about songs, his own life and the communal spirit that music builds."—Star Tribune

"There are a lot of rock critics who focus on the negative, or shrug off the humanity of music fandom in favor of cold logic and bloodless analysis. Walsh is not that kind of writer or critic: even when he struggles with what’s going on around him, even when life is unbearably shitty, his writing is usually positive and filled with hope."—PopMatters.com

"Organized thematically, it demonstrates Walsh’s knack for using music as a springboard for writing about people’s lives and the communities they inhabit. Walsh’s intimate, nuanced prose makes you feel as if you’ve known him, and the people he writes about, for years."—Minnesota History

Jim Walsh is a Minneapolis-based writer, journalist, columnist, and songwriter and the author of The Replacements: All Over But The Shouting: An Oral History and, with Dennis Pernu, The Replacements: Waxed Up Hair and Painted Shoes: The Photographic History. The former music editor at City Pages and pop music columnist at the St.Paul Pioneer Press and current staff columnist at the Southwest Journal and a regular contributor to Minnpost.com and others, Walsh has published in Rolling Stone, SPIN, the Village Voice, the L.A. Weekly, the Star Tribune, Melody Maker, Billboard, the Utne Reader, and has been a recipient of the John S. Knight Journalism Fellowship at Stanford University. He is the former leader of bands REMs, Laughing Stock, and The Mad Ripple, and the ringleader behind the 10-year-old singer/songwriter showcase The Mad Ripple Hootenanny.