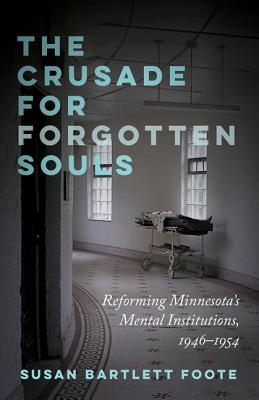 The Crusade for Forgotten Souls

Winner of the 2019 Minnesota Book Award for Minnesota Nonfiction

In 1940 Engla Schey, the daughter of Norwegian immigrants, took a job as a low-paid attendant at Anoka State Hospital, one of Minnesota’s seven asylums. She would work among people who were locked away under the shameful label “insane,” called inmates—and numbered more than 12,000 throughout the state. She acquired the knowledge and passion that would lead to “The Crusade for Forgotten Souls,” a campaign to reform the deplorable condition of mental institutions in Minnesota. This book chronicles that remarkable undertaking inspired and carried forward by ordinary people under the political leadership of Luther Youngdahl, a Swedish Republican who was the state’s governor from 1946 to 1951.


Susan Bartlett Foote tells the story of those who made the crusade a success: Engla Schey, the catalyst; Reverend Arthur Foote, a modest visionary who guided Unitarians to constructive advocacy; Genevieve Steefel, an inveterate patient activist; and Geri Hoffner, an intrepid reporter whose twelve-part series for the Minneapolis Tribune galvanized the public. These reformers overcame barriers of class, ethnicity, and gender to stand behind the governor, who, at a turbulent moment in Minnesota politics, challenged his own party’s resistance to reform. The Crusade for Forgotten Souls recounts how these efforts broke the stigma of shame and silence surrounding mental illness, publicized the painful truth about the state’s asylums, built support among citizens, and resulted in the first legislative steps toward a modern mental health system that catapulted Minnesota to national leadership and empowered families of the mentally ill and disabled. Though their vision met resistance, the accomplishments of these early advocates for compassionate care of the mentally ill hold many lessons that resonate to this day, as this book makes compellingly clear.

"In a wondrous feat of research and storytelling, Susan Bartlett Foote has distilled personal accounts, public and institutional records, and newspaper coverage to dramatically detail Minnesota’s mental health reform of the last century. Her narrative is harrowing and inspiring—a tribute to the difficult work of countless people, many of them outraged ordinary folk, who challenged the horrors of a stubborn and intractable system."—Jack El-Hai, author of The Nazi and the Psychiatrist and The Lobotomist

"The Crusade for Forgotten Souls recounts the story of courageous Minnesotans who fought the first battle in the ongoing fight for the rights of the mentally ill. Others have taken up the cause, like my father, Paul Wellstone, who made mental health reform the centerpiece of his years in the United States Senate. Susan Bartlett Foote’s compelling story provides an inspiration to current reformers to continue the crusade for what my father called ‘a besieged minority.’"—Dave Wellstone

"Susan Bartlett Foote’s exhaustively researched book gives compelling evidence that even by the standards of the time, Minnesota’s system of segregated mental institutions was backward, barbaric and particularly resistant to social change."—Star Tribune

"The historian’s dream scenario—serendipitously stumbling upon a cache of previously unexamined documents in one’s own home—prompted Susan Bartlett Foote’s inquiry into a group of post-war reformers who envisioned nothing less than a complete overhaul of Minnesota’s mental health system." —Social History of Medicine Journal, Oxford Press

Susan Bartlett Foote is professor emerita in the School of Public Health at the University of Minnesota, where she was head of the Division of Health Policy and Management from 1999 to 2005. She is the author of Managing the Medical Arms Race: Business and Public Policy in the Medical Device Industry.