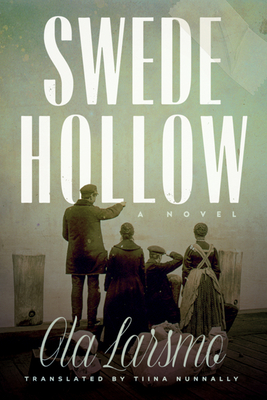 A riveting family saga immersed in the gritty, dark side of Swedish immigrant life in America in the early twentieth century

When Gustaf and Anna Klar and their three children leave Sweden for New York in 1897, they take with them a terrible secret and a longing for a new life. But their dream of starting over is nearly crushed at the outset: a fire devastates Ellis Island just as they arrive, and then the relentlessly harsh conditions and lack of work in the city make it impossible for Gustaf to support his family. An unexpected gift allows the Klars to make one more desperate move, this time to the Midwest and a place called Swede Hollow.

Their new home is a cluster of rough-hewn shacks in a deep, wooded ravine on the edge of St. Paul, Minnesota. The Irish, Italian, and Swedish immigrants who live here are a hardscrabble lot usually absent from the familiar stories of Swedish American history. The men hire on as poorly paid day laborers for the Great Northern or Northern Pacific railroads or work at the nearby brewery, and the women clean houses, work at laundries, or sew clothing in stifling factories. Outsiders malign Swede Hollow as unsanitary and rife with disease, but the Klar family and their neighbors persevere in this neglected corner of the city—and consider it home.

Extensively researched and beautifully written, Ola Larsmo’s award-winning novel vividly portrays a family and a community determined to survive. There are hardships, indignities, accidents, and harrowing encounters, but also acts of loyalty and kindness and moments of joy. This haunting story of a real place echoes the larger challenges of immigration in the twentieth century and today.

Ola Larsmo is a critic and columnist for Sweden’s largest newspaper, Dagens Nyheter, and the author of nine novels and several collections of short stories and essays. He received the Bjørnson Prize from the Norwegian Academy of Literature and Freedom of Expression and, after the publication of Swede Hollow, two prestigious Swedish awards: the Lagercrantz Critics’ Prize from Dagens Nyheter and Natur & Kultur’s cultural prize. He was president of PEN Sweden from 2009 to 2017 and editor of Bonniers Literary Magazine from 1984 to 1990.


Tiina Nunnally is the award-winning translator of Sigrid Undset’s novels Kristin Lavransdatter, Jenny, and Marta Oulie. Her many translations from the Scandinavian languages include Vidar Sundstøl’s Minnesota Trilogy (Minnesota, 2013–15) and The Complete and Original Norwegian Folktales of Asbjørnsen and Moe (Minnesota, 2019).


Praise For Swede Hollow: A Novel…

"Deeply researched and full of memorable moments, Swede Hollow is the powerful story of a family who makes the long journey to St. Paul from Sweden in the 1890s and struggles to create new lives for themselves in a hidden quarter of the city. Ola Larsmo writes with sympathy and grace, and his tale is a quiet epic, full of wonder and dreams and loss. Not to be missed."—Larry Millett, author of Metropolitan Dreams

"Ola Larsmo presents a sober and realistic portrayal of the suffering and hardships that awaited Swedish immigrants after they arrived in America. Swede Hollow is a moving, at times harrowing, always convincing novel on a truly epic scale."—Steve Sem-Sandberg, author of The Emperor of Lies

"Ola Larsmo has animated a singular place and moment in the story of Minnesota’s settlement by Europeans. Larsmo is a faithful storyteller, rooted in historical incident, hearing the voices and breathing life into people who risked everything to forge new beginnings and raise up families by sweat, fist, and the ragged, life-giving fabric of clan."—Peter C. Brown, author of The Fugitive Wife

"Those looking for a conventional plot won't find it here: Larsmo writes believable scenes grounded in sensory experience, with relatively complicated characters, in some sort of chronological order, but also seems content to branch out into what are essentially self-contained short stories about characters peripheral to the main intertwined family saga. A worthy addition to the shelf of books about the immigrant experience." —Kirkus Reviews