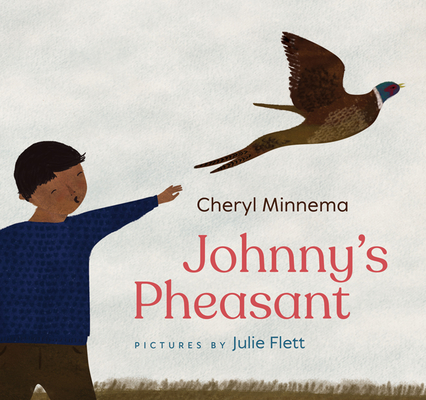 
"Pull over, Grandma! Hurry!” Johnny says. Grandma does, and Johnny runs to show her what he spotted near the ditch: a sleeping pheasant. What Grandma sees is a small feathery hump. When Johnny wants to take it home, Grandma tries to tell him that the pheasant might have been hit by a car. But maybe she could use the feathers for her craftwork? So home with Grandma and Johnny the pheasant goes . . .

It’s hard to say who is most surprised by what happens next—Grandma, Johnny, or the pheasant. But no one will be more delighted than the reader at this lesson about patience and kindness and respect for nature, imparted by Grandma’s gentle humor, Johnny’s happy hooting, and all the quiet wisdom found in Cheryl Minnema’s stories of Native life and Julie Flett’s remarkably evocative and beautiful illustrations.

Cheryl Minnema (Waabaanakwadookwe) is a member of the Mille Lacs Band of Ojibwe. She was born in Minneapolis and raised on the Mille Lacs Reservation. Along with writing children’s literature and poetry, she creates Ojibwe floral beadwork and nature photography. She is author of Hungry Johnny, which was a 2015 Native America Calling book club selection.


Julie Flett is a Cree-Métis author, illustrator, and artist who lives in Vancouver, British Columbia. She has received many awards, including the 2017 Governor General’s Award for Children’s Literature, the 2016 American Indian Library Association Award for Best Picture Book, and Christie Harris Illustrated Children’s Literature Awards. Her Wild Berries, one of Kirkus’s Best Children’s Books of 2013, was a title selection for Canada’s First Nation Communities Read.