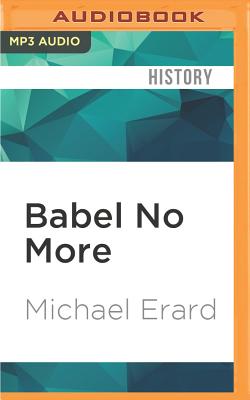 A "fascinating" (The Economist) dive into the world of linguistics that is "part travelogue, part science lesson, part intellectual investigation...an entertaining, informative survey of some of the most fascinating polyglots of our time" (The New York Times Book Review).

We all learn at least one language as children. But what does it take to learn six languages...or seventy? In Babel No More, Michael Erard, "a monolingual with benefits," sets out on a quest to meet language superlearners and make sense of their mental powers. On the way he uncovers the secrets of historical figures like Italian cardinal Giuseppe Mezzofanti, who was said to speak seventy-two languages; Emil Krebs, a pugnacious German diplomat, who spoke sixty-eight languages; and Lomb Kat, a Hungarian who taught herself Russian by reading Russian romance novels.

On his way to tracking down the man who could be called the most linguistically talented person in the world, Erard meets modern language-superlearners. Among them is Alexander, who shows Erard the tricks of the trade and gives him a dark glimpse into the life of obsessive language acquisition. "Others do yoga," writes Erard. "Alexander does grammatical exercises."

With his ambitious examination of what language is, where it lives in the brain, and the cultural implications of polyglots' pursuits, Erard explores the upper limits of our ability to learn and to use languages, illuminating the intellectual potential in everyone. How do some people escape the curse of Babel--and what might the gods have demanded of them in return?