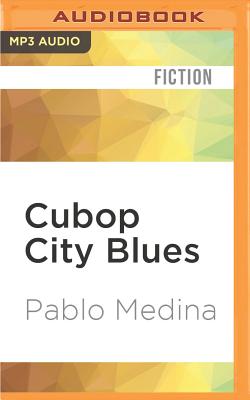 Our guide into Cubop City is The Storyteller, born nearly blind and shrouded in his mother's guilt. He's homeschooled inside his parents' crumbling apartment with a European housekeeper, and educated through Encyclopedia Britannica, the Bible, and Arabian Nights. When he's 25, his mother and father are both diagnosed with cancer, and The Storyteller alone is left to care for them. He does so by telling them stories conceived from the prolific reading that allowed his imagination to flourish despite little contact with the outside world.

Through his tales full of magic, sorrow, longing, and love, Cubop City surges colorfully to life. Moving through myriad points of view, The Storyteller imagines a world populated by both well-known figures like Chano Pozo and Jelly Roll Morton, and invented characters, most notably a mustachioed man who is stabbed by a stranger and embarks on a novel-long search for his attacker.

Molded in the cadence of Afro-Cuban jazz, Cubop City is a symphonic portrait of a bustling urban landscape and the intimate lives that give a city its voice.