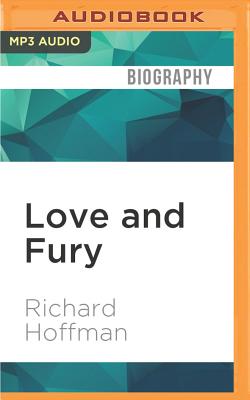 An acclaimed author reflects on his upbringing in a post-World War II blue-collar family and comes to terms with the racism, sexism, and other toxic values he inherited.

Richard Hoffman sometimes felt as though he had two fathers: the real one who raised him and an imaginary version, one he talked to on the phone, and one he talked to in his head. Although Hoffman was always close to the man, his father remained a mystery, shrouded in a perplexing mix of tenderness and rage. When his father receives a terminal cancer diagnosis, Hoffman confronts the depths and limitations of their lifelong struggle to know each other, weighing their differences and coming to understand that their yearning and puzzlement was mutual.

With familial relationships at its center, Love & Fury draws connections between past and present, from the author's grandfather, a "breaker boy" sent down into the anthracite mines of Pennsylvania at the age of 10, to his young grandson, whose father is among the estimated one million young black men incarcerated today.

In a critique of culture and of self, Hoffman grapples with the way we have absorbed and incorporated the compelling imagery of post-WWII America and its values, especially regarding class, war, women, race, masculinity, violence, divinity, and wealth.

A masterful memoirist, Hoffman writes not only to tell a gripping story but also to understand, through his family, the social and ethical contours of American life. At the book's core are the author's questions about boyhood, fatherhood, and grandfatherhood, and about the changing meaning of what it means to be a good man in America, now and into the future.