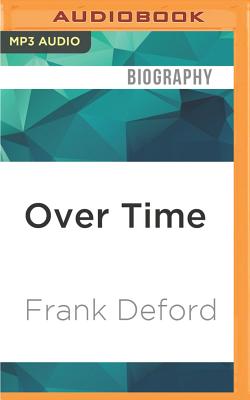 Over Time: My Life as a Sportswriter is as unconventional and wide-ranging as Frank Deford's remarkable career, in which he has chronicled the heroes and the characters of just about every sport in nearly every medium. Deford joined Sports Illustrated in 1962, fresh, and fresh out of Princeton. In 1990, he was Editor-in-Chief of The National Sports Daily, one of the most ambitious and ill-fated projects in the history of American print journalism. But then, he's endured: writing ten novels, winning an Emmy (not to mention being a fabled Lite Beer All-Star), and last week he read something like his fourteen-hundredth commentary on NPR's Morning Edition. "From the Mad Men-like days of SI in the 60s, and the bush" years of the early NBA, to Deford's visit to apartheid South Africa with Arthur Ashe, and his friend's brave and tragic death, Over Time is packed with intriguing people and stories. Interwoven through his personal history, Deford lovingly traces the entire arc of American sports writing from the lurid early days of the Police Gazette, through Grantland Rice and Red Smith and on up to ESPN. This is a wonderful, inspired audiobook equal parts funny and touching a treasure for sports fans. Just like Frank Deford.