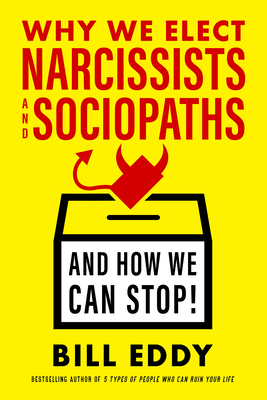 Bestselling author, therapist, lawyer, and mediator Bill Eddy describes how dangerous, high-conflict personalities have gained power in governments worldwide--and what citizens can do to keep these people out of office.

Democracy is under siege. The reason isn't politics but personalities: too many countries have come under the sway of high-conflict people (HCPs) who have become politicians. Most of these high-conflict politicians have traits of narcissistic personality disorder, antisocial (i.e., sociopathic) personality disorder, or both. This is the first and only guide for identifying and thwarting them.

HCPs don't avoid conflict, they thrive on it, widening social divisions and exacerbating international tensions. Eddy, the world's leading authority on high-conflict personalities, explains why they're so seductive and describes the telltale traits that define HCPs--he even includes a helpful list of forty typical HCP behaviors.

Drawing on historical examples from Hitler, Stalin, Mao, and Nixon to Trump, Maduro, and Putin, Eddy shows how HCPs invent enemies and manufacture phony crises so they can portray themselves as the sole heroic figure who can deal with them, despite their inability to actually solve problems. He describes the best ways to expose HCPs as the charlatans they are, reply to their empty and misleading promises, and find genuine leaders to support. Eddy brings his deep psychotherapeutic experience to bear on a previously unidentified phenomena that presents a real threat to the world.

Bill Eddy is the cofounder and training director of the High Conflict Institute and is a senior family mediator at the National Conflict Resolution Center. He is also a licensed clinical social worker with twelve years of experience and currently serves on the faculty of the Straus Institute for Dispute Resolution at the Pepperdine University School of Law. He is the author or coauthor of fourteen books and has a popular blog on the Psychology Today website with over 2 million views.

“Bill Eddy’s newest book is a must-read for every citizen. As a clinical psychologist and family mediator, I found his impressive analysis of the powerful politics that influence each of our lives to be a compelling but easy-style read. The book offers a fresh, intellectually invigorating perspective on the endless political polarization and rapid rise of authoritarian leadership in America. Grounded in his concept of the high-conflict person (HCP), Eddy exquisitely expands our understanding of the dynamics of divided politics. He presents a well-researched, well-documented historical view of how leaders (from both the left and the right) with authoritarian, high-conflict personalities have emerged as dictators in numerous countries worldwide and then shows the reader the core elements in common among them. It is through this historical lens that we are able to distance ourselves from our bubble of the current, chaotic Trump phenomenon to see the dangers presented by any potential leader with malignant-narcissistic personality characteristics. Then, with that understanding of the core features of the HCP personality, coupled with comprehension of the political methodology of the ‘Wannabe King,’ with its predictable, template-like precision for gaining power, the reader is given the personal and political tools for countering this formidable force. Eddy details a prescriptive, strategic action formula for preventing the predictable destructive outcomes of authoritarian leaders. This book will alarm you, inform you, and shake up your perspective—propelling you to take action—but only reasonable and effective action!”
—Donald T. Saposnek, PhD, author of Mediating Child Custody Disputes and coauthor of Splitting America

“Understanding why people follow and support leaders with behaviours that are extreme and unwarranted is the topic of Bill Eddy’s new book, Why We Elect Narcissists and Sociopaths—And How We Can Stop! In this fascinating work, the tumultuous and horrific impact of such leaders, how such individuals are shaped, and why they are supported are considered in the context of high-conflict personality and behaviours. From Hitler to Trump, the reader is invited to consider how the use of fantasy enemies, emotion, and media to divide ‘enemies’ and garner supporters is enhanced by building relationships based on simplistic and repetitive messaging. The analysis of ten ‘leaders’ is based on how such characters are preoccupied with blaming others, display all-or-nothing thinking, have unmanaged or intense emotions, and in Eddy’s words have extreme negative behaviours ‘that 90 percent of people would never do.’
Fundamentally, the book invites us to consider the role of ‘Wannabe Kings’ who have managed, often despite being considered incompetent or controllable, to be elevated to high positions and cause havoc. Whilst some readers may quibble about the death counts that are attributable to the ‘Wannabe Kings,’ there is no doubt that the ten individuals described had a number of common characteristics when considered through the lens of personality disorder and behaviour. How such seemingly unattractive personalities can build emotional connection through simplistic messaging is explored using examples and noting how each ‘Wannabe King’ employed repetition, the media, and perhaps the optimism of followers who hope that the behaviour would improve or that the ‘hero’ would resolve whatever ‘fantasy crisis’ had been created.
Importantly however, this book gives the readers, and those grappling with ‘Wannabe Kings,’ tools to prevent their ascension and to moderate the discourse that surrounds their grim reign. From the workplace to the political space, the book will inspire us to think differently about the tactics, behaviours, and personalities of some so-called leaders and revisit our approach to remake our future.”
—Professor Tania Sourdin, Dean and Head of School, Newcastle Law School

“Thank you for this book. I wish I’d had it at the beginning of last year when I was running for Congress! A huge value of this book to me is to be better able to understand people trying to tear down our democracy. I learned several ways where I might have better persuaded erstwhile friends of mine to look objectively at candidates rather than following slogans.”
—Chuck Eddy, moderate Republican candidate, 2018 primary for Kentucky’s 6th Congressional District

“Author Bill Eddy has done a remarkable job of assessing the world of modern politics and those who have learned how to use their power to manipulate modern communication tools to influence unsuspecting voters. It is a brave new world. Bill has competently described the characteristics of many individuals who have no business in positions of power or authority but they are because they have learned how to work the system, to the detriment of the community, for their own personal advantage—a sinister scheme that plays out every day.
Bill makes no distinction between partisan politicians, as his observations apply to many of those who seek power. As a long-standing member of the Republican Party and the chairman of the committee to recall the former mayor of San Diego, Bob Filner, I recognize that all of Filner’s faults and failures can be directly attributed to the caustic characteristics so eloquently described by Bill.
This book is a must-read for anyone interested in seeing how sausage is really made.”
—Michael J. Pallamary, PLS

“The younger generations inherit an increasingly interconnected world, one with global problems that require international solutions. With such powerful world-altering positions being compromised, it is of great importance to know the warning signs and the proper response—else history will continue to repeat itself. In discussing top-ranking politicians that cause harm and controversy, Bill Eddy brings his expertise of psychology and advances a developing theory of high-conflict personalities.”
—Crosby Doyle, recent graduate in political science and sustainability systems

“As a former judge and elected district attorney, I have dealt with several high-conflict politicians and elected officials with the characteristics that Bill Eddy describes in this book. He’s right on when he says they create unnecessary crises and conflicts and see themselves as big heroes instead of doing their real jobs. From my experience, his suggestions for what to do make a lot of sense for reasonable politicians as well as voters. This is a must-read for anyone running for or thinking of running for election and even more important for those trying to govern.”
—Bonnie Dumanis, former judge and recently retired longtime San Diego County District Attorney

“Personality disorders are dangerously important today, and it’s vital we understand this better. We need this book.”
—Marjorie Kelly, Author, The Divine Right of Capital and Owning Our Future and Executive VP, The Democracy Collaborative
or support indie stores by buying on
Copyright © 2020 American Booksellers Association