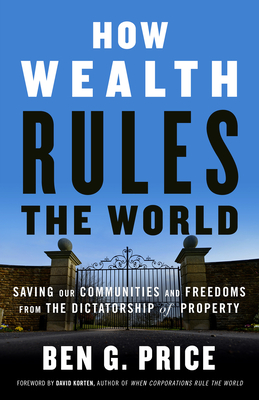 How Wealth Rules the World (Paperback)

Saving Our Communities and Freedoms from the Dictatorship of Property

Crackdowns on local democracy are accelerating, as corporate and state interests continue efforts to repress social movements. In this well-timed book, Ben Price presciently reveals structures of power and law that facilitate blatant corporate supremacy in the United States.

Price uses his years of experience as a community organizer and a careful reading of history to show how a legal paradigm that facilitated slavery and the fossil fuel economy has endured and adapted over time - today barricading our communities and squelching dissent.

Many books have been written about wealth, power and politics in the United States. Most of them make intuitive sense. Wealthy people use their power to influence and control politics. But Ben Price's new book is often counterintuitive as he explores how wealth itself is imbued with power. He answers questions such as:

How is the American Legislative Exchange Council - a modern states' rights, free market capitalist group - the intellectual and political descendant of George Washington's Federalist Party?
How was the Fourteenth Amendment that emancipated African American slaves from their status as property used by a reactionary Supreme Court to grant legal "personhood" to private corporations?
How are cities seen under our legal doctrine as "public corporations," devoid of real governing authority?

Further, Price identifies key counterrevolutions in U.S. history that squelched the transformative potential of the Civil War and American Revolution, and traces the roots of colonial and imperial systems of control. He links them to modern "free trade" agreements and other antidemocratic structures used to supersede democracy to this day.

For some, this will come as no surprise. For others, it will be a rude, though necessary, awakening. "The white man's municipalities are just reservations, like ours," said a resident of Pine Ridge Reservation, who Price spoke with. "The difference is, we know we live on reservations. The white man doesn't."

Crucially, Price shares insight into how social movements can plant seeds of a new legal system that makes the liberty, civil rights and dignity of humans and ecosystems its ultimate purpose. In fact, he introduces the reader to people who are doing just that.

Ben G. Price is the Community Environmental Legal Defense Fund's national organizing director, with fifteen years of experience organizing communities and coordinating organizers across the country to challenge state and federal legalization of corporate assaults against people and their environments. He pioneered Rights of Nature legislation in the United States and assisted scores of communities to enact rights-protecting laws.

Praise For How Wealth Rules the World: Saving Our Communities and Freedoms from the Dictatorship of Property…

“This wonderful book makes clear some of the power mechanisms by which the rich steal from the poor and the powerful are killing the planet. Better, it makes clear means by which we can and must fight back."
—Derrick Jensen, author of Endgame, The Myth of Human Supremacy, and The Culture of Make Believe

“Indigenous people have said for hundreds of years that a society based on conquest is not sustainable. Time to move past empire. The UN has just reaffirmed that for Mother Earth to be healthy, capitalism and corporate control cannot continue. The rights of corporations cannot supersede the rights of nature.”
—Winona LaDuke, Executive Director, Honor the Earth

“In this book you can discover what intrepid communities across the country have learned and why they’ve taken up the community rights strategy. The Federalists who wrote the US Constitution were counterrevolutionaries bent on pushing the American Revolution off course. No believers in the ideals of the Declaration of Independence, they vested greater rights in property than in people and put us on the disastrous route to environmental devastation and social chaos we are witnessing today. Modern-day Federalists and the system of government they inherited keep us ever on that course, through judicial adherence to precedent. Correcting the counterrevolutionary agenda that allows wealth to govern our lives instead of democratically assembled communities of people will require a full-blown people’s movement. Ben Price has written your invitation to join that fight.”
—Thom Hartmann, author of over twenty books including Cracking the Code and Unequal Protection

“How Wealth Rules the World should be prerequisite reading for all serious social science academicians and especially social change activists. It convincingly exposes how property became and remains the single most sacred and legally protected right in our culture and increasingly globally, which has routinely blocked peoples' right to protect the health, safety, and environment of their communities. Price challenges people of conscience dedicated to human rights and protecting the planet in our life-threatening times to rethink their goals and reassess their strategies directed toward authentic life-affirming systemic change.”
—Greg Coleridge, Outreach Director, Move to Amend

“Powerfully and unflinchingly, Ben Price is telling the truth: the truth about the founding of our nation, our legal system, the mess we're in—and what we can do to change it. Well said, every word, and all true. It is staggering to realize that the architecture of this country was (and still is) designed to deliver injustice and inequality in perpetuity unless we work for real change. I appreciated the in-depth historical and contemporary look at this issue. It’s a bit overwhelming to realize the depth of revolution required if we are ever to see real democracy here in the United States, but Price guides us through the challenges to the opportunities with depth, intensity, and dedication to getting to the vision that so many of us hold for people-powered democracy. An important read.”
—Rivera Sun, author of The Dandelion Insurrection

“Revolutions face counterrevolutions, and the American Revolution of 1776 was immediately undermined by the framers of the Constitution, the wealthy ruling class Federalists, whose rule of law is really the rule of the richest and their institutions over the rights of the people and our democracy.
Ben Price’s important new book, How Wealth Rules the World, is a revelatory page-turner, an urgent and timely guide to both explain the subversion of democracy by the rich and to provide a way out of the meat grinder that is shredding and destroying families, communities, countries, and our planet’s very biosphere, its ability to sustain nature and civilizations.
We the people have the right to alter and abolish corrupt systems of government, such as the entrenched superrich and their institutions and corporations that control both political parties. But our sacred revolutionary rights to determine our future, the birthrights that are taught in our textbooks, mean nothing to the courts, politicians, and lobbyists who serve the wealthy whom the Federalist counterrevolution placed over us like a new King George.
Now in the 21st century, a critical new movement to expose these realities and mobilize our citizenry, to rescue ourselves from the cold fate of corporate control, and to reestablish the power of people over the ruling elite, has begun. Ben Price is in its forefront, and he tells its story revealing how you and your community can reclaim control of our future for the common good.
The true American Dream of radical democracy is being reborn, and its rebirth is the key to saving the planet itself. This new democratic revolution will not be televised nor promoted in corporate media from the Washington Post to Facebook. Those self-serving institutions are owned by billionaire oligarchs, the elite who get richer while we and our lives and environment are strangled by their courts and politicians. They hide these truths and they stand in our way.
How Wealth Rules the World guides us past their PR and propaganda to help us understand how to apply today the vision and first principles of 1776 and how we suffer from democracy’s demise in the hands of the Federalists and their counterrevolutionary progeny.
The counterrevolution of business and property over we the people, our rights and communities, has grown ever stronger for hundreds of years as American courts and politicians serving the elite have subverted our branches of government. Read How Wealth Rules the World, share it, discuss it, and organize around it as if your family’s and friends’ lives depended on it—because they do.”
—John Stauber, author of bestsellers including Toxic Sludge Is Good for You; Trust Us, We’re Experts; and Weapons of Mass Deception

“Unlike good ice cream, the truth can be hard to swallow. But you won’t get a brain-freeze from reading this book. Dig into Ben Price’s How Wealth Rules the World. I promise; it’ll be good for you. He’s scooped the political historians by serving up unexpected revelations chock-full of common sense.”
—Jerry Greenfield, cofounder of Ben & Jerry’s

“How Wealth Rules the World is an immensely important revelatory work that lifts the blanket off this still insufficiently discussed but absolutely most important issue. Ben Price offers a step-by-step explanation of the extent to which the wealthiest 1 percent of the population have managed to usurp control and undermine the once democratic processes in the United States, distorting them to serve only the goals of the richest people on the planet. This information is mandatory for anyone interested in pursuing positive change, and Ben Price has done a magnificent, step-by-step presentation of the roots and details of the problem. Right now, this is probably the most important subject we all need to address. Thank you to Ben Price for moving the details forward.”
—Jerry Mander, author of Four Arguments for the Elimination of Television and The Capitalism Papers
or support indie stores by buying on
Copyright © 2020 American Booksellers Association