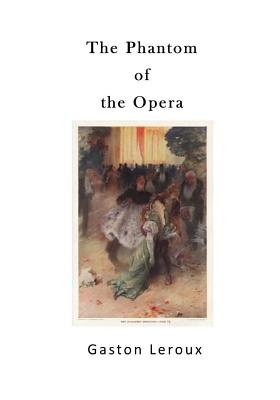 The Phantom of the Opera Le Fant me de l'Op ra by Gaston Leroux The Phantom of the Opera is a novel by French writer Gaston Leroux. It was first published as a serialisation in Le Gaulois from September 23, 1909, to January 8, 1910. It was published in volume form in April 1910 by Pierre Lafitte. The novel is partly inspired by historical events at the Paris Opera during the nineteenth century and an apocryphal tale concerning the use of a former ballet pupil's skeleton in Carl Maria von Weber's 1841 production of Der Freischutz. Nowadays, it is overshadowed by the success of its various stage and film adaptations. The most notable of these are the 1925 film depiction featuring Lon Chaney and Andrew Lloyd Webber's 1986 musical. The Opera ghost really existed. He was not, as was long believed, a creature of the imagination of the artists, the superstition of the managers, or a product of the absurd and impressionable brains of the young ladies of the ballet, their mothers, the box-keepers, the cloak-room attendants or the concierge. Yes, he existed in flesh and blood, although he assumed the complete appearance of a real phantom; that is to say, of a spectral shade. When I began to ransack the archives of the National Academy of Music I was at once struck by the surprising coincidences between the phenomena ascribed to the "ghost" and the most extraordinary and fantastic tragedy that ever excited the Paris upper classes; and I soon conceived the idea that this tragedy might reasonably be explained by the phenomena in question. The events do not date more than thirty years back; and it would not be difficult to find at the present day, in the foyer of the ballet, old men of the highest respectability, men upon whose word one could absolutely rely, who would remember as though they happened yesterday the mysterious and dramatic conditions that attended the kidnapping of Christine Daae, the disappearance of the Vicomte de Chagny and the death of his elder brother, Count Philippe, whose body was found on the bank of the lake that exists in the lower cellars of the Opera on the Rue-Scribe side. But none of those witnesses had until that day thought that there was any reason for connecting the more or less legendary figure of the Opera ghost with that terrible story. The truth was slow to enter my mind, puzzled by an inquiry that at every moment was complicated by events which, at first sight, might be looked upon as superhuman; and more than once I was within an ace of abandoning a task in which I was exhausting myself in the hopeless pursuit of a vain image. At last, I received the proof that my presentiments had not deceived me, and I was rewarded for all my efforts on the day when I acquired the certainty that the Opera ghost was more than a mere shade.