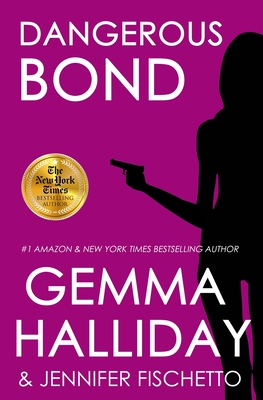 From #1 Amazon, New York Times & USA Today Bestselling author Gemma Halliday comes female PI Jamie Bond and a case of Murder Most Hilarious... Her name is Bond. Jamie Bond. And danger follows her everywhere. As a private investigator, Jamie Bond thought she had seen every sort of cheating-spouse case imaginable. That is until she's hired by a wife who's afraid her husband is cheating...on his diet. Rodger Claremont lost mega-pounds eating sandwiches from the Hoagies chain and subsequently became their celebrity spokesman. A position his wife fears he'll quickly lose if the pounds come back on. But what starts as a simple case of following a potentially unfaithful (to his diet) husband, turns deadly when Jamie finds Rodger murdered in his own home. Was the wife afraid of losing her sandwich fortune? Was it a competing fast-food chain out for revenge? Or did Rodger's friendship with a shady rapper named Heavy Cash have anything to do with it? Jamie vows to get to the bottom of it, even if it means stepping on the toes of the investigating assistant district attorney, Aiden Prince-a man Jamie could easily find herself falling for despite her budding attraction to her best friend, photographer Danny Flynn. Caught between two men, Jamie finds herself road-tripping to Vegas, babysitting a pair of Senior Sleuths, searching for a missing ex-boyfriend, and tracking down a cold-blooded killer...who threatens to strike again The Jamie Bond Mysteries:
Unbreakable Bond (book #1)
Secret Bond (book #2)
Lethal Bond (book #3)
Bond Bombshell (short story)
Dangerous Bond (book #4)
Bond Ambition (short story)
Fatal Bond (book #5)
Deadly Bond (book #6) Here's what critics are saying about Gemma Halliday's books: "A saucy combination of romance and suspense that is simply irresistible."
Chicago Tribune "Stylish... nonstop action...guaranteed to keep chick lit and mystery fans happy "
Publishers' Weekly, starred review "Ms. Halliday is the undisputed queen of the genre."
Fresh Fiction

Gemma Halliday is the New York Times and USA Today bestselling author of the High Heels Mysteries, the Hollywood Headlines Mysteries, the Jamie Bond Mysteries, the Tahoe Tessie Mysteries, as well as several other works. Gemma's books have received numerous awards, including a Golden Heart, two National Reader's Choice awards, and three RITA nominations. She currently lives in the San Francisco Bay Area with her boyfriend, Jackson Stein, who writes vampire thrillers, and their three children, who are adorably distracting on a daily basis. To learn more about Gemma, visit her online at http: //www.gemmahalliday.com Jennifer Fischetto is the National Bestselling Author of the Jamie Bond Mysteries. Unbreakable Bond, her adult debut novel, has received a National Reader's Choice award nomination. She writes dead bodies for ages 13 to six-feet-under. When not writing, she enjoys reading, cooking, singing (off-key), and watching an obscene amount of TV. She also adores trees, thunderstorms, and horror movies-the scarier the better. She lives in Western Mass with her family and is currently working on her next project. To learn more about Jennifer Fischetto, visit her online at: http: //jenniferfischetto.com
Loading...
or support indie stores by buying on