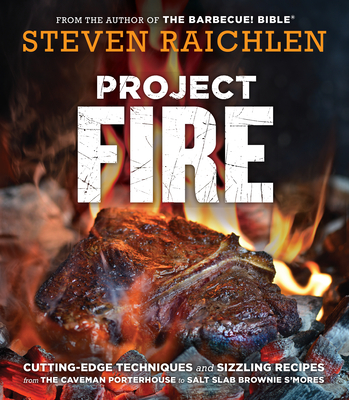 An electrifying new approach by the man who literally wrote the bible on barbecue. Cutting edge techniques meet time-honed traditions in 100 boldly flavored recipes that will help you turbocharge your game at the grill. Here’s how to reinvent steak with reverse-seared beef tomahawks, dry-brined filets mignons, ember-charred porterhouses, and T-bones tattooed with grill marks and enriched, the way the pros do it, with melted beef fat. Here’s how to spit-roast beer-brined cauliflower on the rotisserie. Blowtorch a rosemary veal chop. Grill mussels in blazing hay, peppery chicken under a salt brick, and herb-crusted salmon steaks on a shovel. From Seven Steps to Grilling Nirvana to recipes for grilled cocktails and desserts, Project Fire proves that live-fire, and understanding how to master it, makes everything taste better.

Steven Raichlen is the author of the New York Times bestselling Barbecue! Bible® cookbook series, which includes the new Brisket Chronicles, Project Fire, Barbecue Sauces, Rubs, and Marinades; Project Smoke; The Barbecue Bible; and How to Grill. Winners of 5 James Beard awards and 3 IACP awards, his books have been translated into 17 languages. His TV shows include the public television series Steven Raichlen’s Project Fire, Project Smoke; Primal Grill; and Barbecue University; the French language series Le Maitre du Grill, and the Italian series Steven Raichlen Grills Italy.  Raichlen has written for the New York Times, Esquire, and all the food magazines; and is the founder and dean of Barbecue University. In 2015, he was inducted into the Barbecue Hall of Fame. His website is www.barbecuebible.com.
Loading...
or support indie stores by buying on