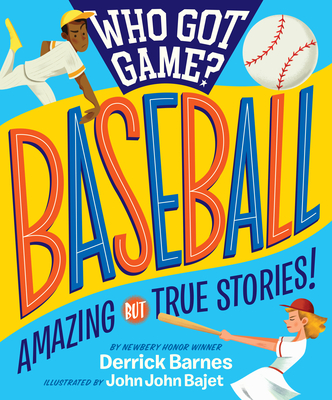 Celebrate the unheralded people and stories that helped shape the game of baseball!

Marvel at records. Did you know that Japanese superstar Sadaharu Oh has a whopping 113 more career homers than Hank Aaron?

And that’s just for starters! This lively illustrated collection of shiny nuggets of baseball lore will transform you into a superfan who knows the game better than anyone else. Someone who’s got game.


Praise For Who Got Game?: Baseball: Amazing but True Stories!…

“A highly recommended first purchase. Readers will be sucked into this unique collection of ‘amazing but true stories’.” — School Library Journal, STARRED

"Inviting for newcomers and eye-opening for longtime fans, this one will have wide appeal in its exploration of the shortcomings and the beauty of America’s favorite pastime.” — Booklist, STARRED

“An ebullient collection of stunning comebacks, awesome athletes, and achievements both grand and dubious.” — Kirkus Reviews

Derrick Barnes is the winner of the 2018 Ezra Jack Keats Book Award for outstanding new writer, and his picture book Crown: An Ode to the Fresh Cut took home four honors at the 2018 American Library Association’s Youth Media Awards: the Coretta Scott King Author Honor and Illustrator Honor, the Newbery Honor, and the Caldecott Honor. Derrick is also the author of the New York Times bestselling picture book The King of Kindergarten, and the bestselling chapter book series Ruby and the Booker Boys. Derrick lives in Charlotte, NC, with his wife, Dr. Tinka Barnes, and their four sons, all of whom play sports.


John John Bajet is a designer at Renegade Animation, and works on the Cartoon Network Show Tom & Jerry. He is the illustrator of If We Could Do What Animals Do.