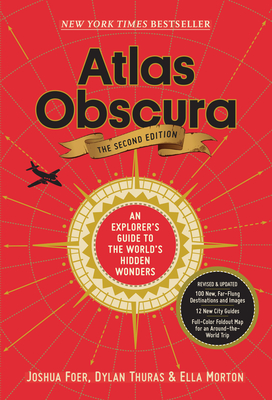 An Explorer's Guide to the World's Hidden Wonders

“A wanderlust-whetting cabinet of curiosities on paper.”— New York Times

Inspiring equal parts wonder and wanderlust, Atlas Obscura is a phenomenon of a travel book that shot to the top of bestseller lists when it was first published and changed the way we think about the world, expanding our sense of how strange and marvelous it really is.

This second edition takes readers to even more curious and unusual destinations, with more than 100 new places, dozens and dozens of new photographs, and two very special features: twelve city guides, covering Berlin, Budapest, Buenos Aires, Cairo, London, Los Angeles, Mexico City, Moscow, New York City, Paris, Shanghai, and Tokyo. Plus a foldout map with a dream itinerary for the ultimate around-the-world road trip. More a cabinet of curiosities than traditional guidebook, Atlas Obscura revels in the unexpected, the overlooked, the bizarre, and the mysterious. Here are natural wonders, like the dazzling glowworm caves in New Zealand, or a baobob tree in South Africa so large it has a pub inside where 15 people can sit and drink comfortably. Architectural marvels, including the M. C. Escher–like stepwells in India. Mind-boggling events, like the Baby-Jumping Festival in Spain—and no, it’s not the babies doing the jumping, but masked men dressed as devils who vault over rows of squirming infants.

Every page gets to the very core of why humans want to travel in the first place: to be delighted and disoriented, uprooted from the familiar and amazed by the new. With its compelling descriptions, hundreds of photographs, surprising charts, maps for every region of the world, and new city guides, it is a book you can open anywhere and be transported. But proceed with caution: It’s almost impossible not to turn to the next entry, and the next, and the next.

“The Second Edition of Atlas Obscura is a hefty book but one that the world traveler in your life will love. There are hidden gems with over 100 more places added from the original. Travel through Budapest, Moscow, Tokyo, and more with the turn of the page and showcase all the curiosities this world holds.” — The Daily Beast

“Beholding hundreds of off-the-beaten-path gems, this book is a treasure chest of wanderlust where readers are transported to places they’re certain to have never encountered.” — Marie Claire

“The second edition of “Atlas Obscura” is a gift so enthralling that it may draw the recipient into a kind of extended trance. Crammed fore-to-aft with “the world’s hidden wonders,” this collaboration by Joshua Foer, Dylan Thuras and Ella Morton features mesmerizing photos, maps, drawings, info and addresses. On one page there’s a Thai monk standing in saffron serenity in a village temple built of brown and green beer bottles; on another a bust of Vladimir Lenin, erected in 1958 by Soviet scientists who made it to Antarctica’s “Southern Pole of Inaccessibility.” If you can get there (the authors have advice about that), you may find, depending on the weather, only the top of the tyrant’s head poking from the snow.”  — Wall Street Journal

"Satisfy your wanderlust and plan your next travel adventure with the help of this brilliantly illustrated guide." —Car and Driver Magazine

Joshua Foer is the cofounder and chairman of Atlas Obscura. He is also the author of Moonwalking with Einstein: The Art and Science of Remembering Everything, a bestseller published in 33 languages, and a forthcoming book about the world's last hunter-gatherers.

Ella Morton is a New Zealand-born, Australia-raised, Brooklyn-based writer, focusing on overlooked aspects of history and culture. After covering consumer technology at CNET she hosted Rocketboom NYC, a web show about New York’s quirkier people and places. Her most popular interview was a chat with Cookie Monster on the set of Sesame Street. Ella was associate editor at AtlasObscura.com, where she wrote about such topics as tobacco smoke enemas, Victorian streaming music services, and the etiquette of marrying a ghost.

Dylan Thuras is the cofounder and creative director of Atlas Obscura. He is also the coauthor of The Atlas Obscura Explorer's Guide for the World's Most Adventurous Kid.