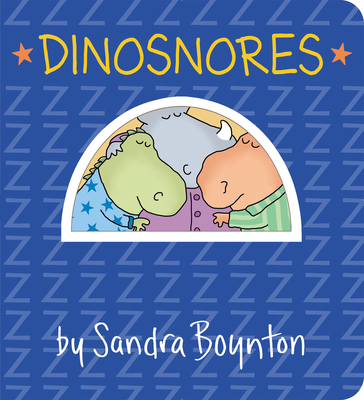 Dinosnores (Boynton on Board)

The snoring goes on, on and on through the night. They never stop snoring till the first morning light.

Ah, all those dinosaurs look so cute in their pajamas. See them yawn and stretch and brush their teeth. Soon they’ll be sound asleep, and . . . OH NO! SNORING!!!

Little kids love big dinosaurs. They also love the sublime silliness of Sandra Boynton books. So what better way to wind down at the end of the day than with DINOSNORES, a rhyming and rhythmic ritual of getting ready for bed—featuring a pile of loudly snoozing dinos.

Sandra Boynton is a popular American cartoonist, children's author, songwriter, producer, and director. Since 1974, Boynton has written and illustrated over sixty children's books and seven general audience books, including five New York Times bestsellers. More than 70 million of her books have been sold, "mostly to friends and family," she says. She has also written (with Michael Ford) and produced six albums of renegade children's music. Three of her albums have been certified Gold (over 500,000 copies sold), and Philadelphia Chickens, nominated for a Grammy, has gone Platinum (over 1 million copies sold). Boynton has also directed twelve music videos of her songs, including the award-winning "One Shoe Blues" starring B.B. King, "Alligator Stroll" starring Josh Turner, and "Tyrannosaurus Funk" (animation) sung by Samuel L. Jackson. She lives in rural New England, and her studio is in a barn with perhaps the only hippopotamus weathervane in America.
Loading...
or
Not Currently Available for Direct Purchase