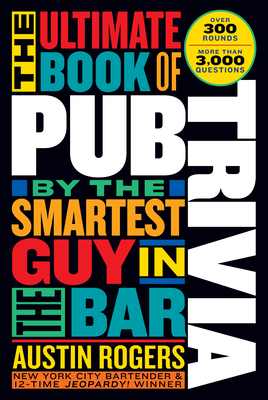 Play the best damn trivia night ever!
From one of the pioneers of pub trivia, Jeopardy! champion Austin Rogers, comes the complete resource for playing and running an uproariously entertaining trivia night, whether you’re hanging out with friends and family, spicing up a party, or hosting an official event at your local pub.

More than a random collection of facts, The Ultimate Book of Pub Trivia features over 300 rounds of ten-question quizzes. Each one is carefully curated to encourage a night of lively competition. The result? Hours and hours of fun as you and your friends answer challenging questions on everything from Bad Movie Descriptions to Winter sports, Kanye and the Kardashians to Brit Lit.


Praise For The Ultimate Book of Pub Trivia by the Smartest Guy in the Bar: Over 300 Rounds and More Than 3,000 Questions…

“There are probably people who know more about trivia than Austin Rogers, and maybe even a few who know more about bars. But I can't think of anyone who knows more about both. Lazy pub quiz hosts will be cribbing from this fantastic book for decades!”
—Ken Jennings, bestselling author and Jeopardy! Greatest of All Time

“The only thing more fun than playing against Austin Rogers on Jeopardy! is playing alongside him at pub trivia. This guy really knows his stuff, and this book is a must-have for anyone who is serious about trivia.”
—Buzzy Cohen, Jeopardy! Champion and Guest Host, and author of Get Ready: A Champion’s Guide to Preparing for the Moments That Matter

Austin Rogers is a Jeopardy! All-Star—having won $411,000—and has returned to the show on the Tournament of Champions. He still hosts his long-running, hugely popular New York City pub trivia night, and he is host of the podcast A Lot to Learn with Austin Rogers.
Loading...
or support indie stores by buying on
(This book is on backorder)