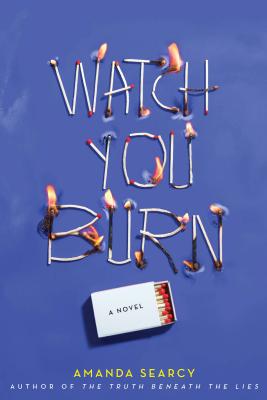 From the author of The Truth Beneath the Lies, which the bestselling author of One of Us Is Lying, Karen M. McManus, called "smart, suspenseful, and unpredictable," comes a psychological thriller about a girl who must keep her arsonist ways hidden--or watch her life go up in flames like a wildfire.

Jenny didn't want to move to the creepy, possibly haunted town with her dad. But the cops are on to her, and the only way she can protect herself is by moving as far away from her hometown as possible and staying out of trouble.

But even after she moves, Jenny still gets the itch. The itch to light a match and then watch it burn.

It's something she hasn't been able to stop, ever since an accident years ago. Now, in a new town, Jenny has the strange feeling that someone is watching her every move. Will her arsonist ways be exposed? Or is the burning truth deep inside her a greater danger?

Praise For Watch You Burn…

Praise for The Truth Beneath the Lies:

"A smart, suspenseful, and unpredictable thriller that will keep readers turning pages until every last lie is revealed."--Karen M. McManus, New York Times betselling author of One of Us is Lying

"Readers will be left breathless, the hair on the backs of their necks standing up. An intricately plotted thriller that's both gritty and engrossing."--Kirkus, starred review

"Told in dual POV with unreliable narrators and red herrings, this thrilling, fast-paced, and complex story will leave the reader questioning the truth until the very end."--Booklist


"Recommended for large high school library collections, especially those with a base of suspense/thriller fans who are not quite ready for Gone Girl."--SLJ

Amanda Searcy is the author of THE TRUTH BENEATH THE LIES. She received her MA in the Theory and Practice of Human Rights from the University of Essex in England. She's now active in SCBWI and a two-time winner in the SouthWest Writers annual contest. She works as a collection development supervisor for the Albuquerque public library system and specializes in the acquisition of young adult materials. Visit her website or follow her on Twitter and Instagram at @Aesearcy.
Loading...
or
Not Currently Available for Direct Purchase