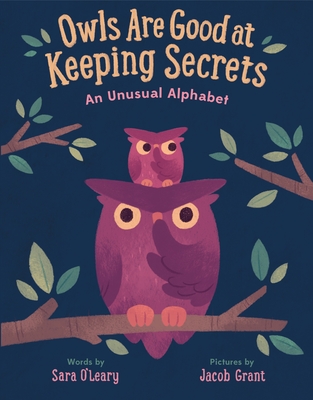 Owls are Good at Keeping Secrets

A delightful book of curious, little-known "facts" about animals--one for each letter of the alphabet!

Did you know that chipmunks love to stay up past their bedtime? Or that dragons cry at happy endings? I bet you'd never have guessed that iguanas sometimes get homesick at sleepovers.

Sara O'Leary pulls back the curtain on the animal world and gives us an absolutely charming little one-line "fact" about one animal for each letter of the alphabet. Kids will love to see their own quirks reflected in these adorably rendered creatures, and perhaps will be comforted to know that--just like them--narwhals can be perfectly happy all on their own and quail also get tired of being told to be quiet.

This is more than just an alphabet book. It's a charming, hilarious, and touching look at the diversity of personalities in the world--worth many, many rereads.

Praise For Owls are Good at Keeping Secrets: An Unusual Alphabet…

PRAISE FOR Owls are Good at Keeping Secrets:

“Animals, who are hiding behind each letter of the alphabet, are revealed as we explore the book.
They, the key characters and true focus of the journey, have attributes that most children will recognize.”--starred review Booklist

“The light sprinkle of visual and verbal humor keeps the book's truisms from feeling stale… Don't let the owls keep this unusual book secret. It deserves to be shared.” --Kirkus

“[A] refreshing bit of imagination to our observations on the animal kingdom. Children will be able to see themselves in one or more of the animals and find validation for their own quirky personalities.” --CM Magazine

"This book is a fun addition to the growing selection of alphabet books with animals not normally used, all the while doing activities that you may not have known they did." --Resource Links

SARA O'LEARY is a writer of fiction for both adults and children. She is the author of the award-winning series of Henry books: When You Were Small, Where You Came From, and When I Was Small, all illustrated by Julie Morstad. A graduate of the University of British Columbia Creative Writing Program, she has taught screenwriting and writing for children at Concordia University, in Montreal. Sara was named for a grandmother who was called Sadie all her life. She is happy to have a child to name after her. Find her on Twitter at @saraoleary.

JACOB GRANT makes absurd and heartfelt picture books, including Cat Knit, Little Bird's Bad Word, and Scaredy Kate. He can almost always be found at his home studio, drawing, painting, and writing until something feels story-ish. He lives with his wife and son in windy Illinois. Find out more at jacobgrantbooks.com.
Loading...
or
Not Currently Available for Direct Purchase