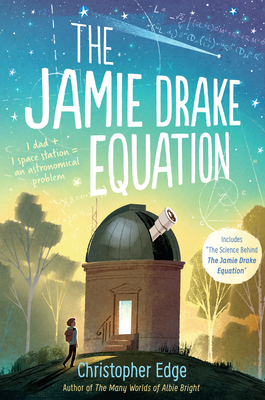 From the author of The Many Worlds of Albie Bright comes another cutting-edge cosmic space adventure for anyone who's ever looked up at the stars and wondered about the universe. An exploration of the constellations, an appreciation of the courage of astronauts, and a loving father-son story. Perfect for fans of Scott Kelly's Astrotwins series.

How amazing would it be to have a dad who's an astronaut? To see him go on rocket launches, live in zero gravity, and fly through space like a superhero? Jamie Drake knows. His dad is orbiting Earth in the International Space Station. Jamie thinks it's cool, and he's proud of his dad, but he also really misses him. Hanging out at the local observatory one day, Jamie is surprised when he picks up a strange signal on his phone. Could it be aliens? Are they closer to our planet than anyone realizes? With his dad in space, Jamie feels he has no choice but to investigate on his own. But when something goes wrong with his dad's mission, Jamie is reminded that space is a dangerous place. He decides it's time to prove that he's a hero too.

Praise For The Jamie Drake Equation…

"With solid science and believable family conflicts, this will be very satisfying to readers whose wishful thinking can suspend disbelief."—Kirkus Reviews, STARRED

"For beginner sci-fi readers or any child interested in aliens and space flight." —
School Library Journal

"Jamie's first-person narrative will draw readers into the story and surprise them with twists along the way as its space-age realism bends toward science fiction." —Booklist

"Edge balances the eerie and the emotional to offer accessible science fiction even when the science itself is inexplicable." --The Bulletin of the Center for Children's Books

"Packed with astrophysics, emotion and invention on a galactic scale, this is science fiction at its most moving and exciting." —The Guardian (UK)

"Edge has found the equation that solves the problem of how to write a fun, intellectually challenging novel with an emotional center." —The Times (UK)

"With family drama and alien intrigue, this captures both the wonder of space and the complexity of growing up." —The Bookseller (UK)

Christopher Edge grew up in Manchester, England, where he spent most of his childhood in the local library, dreaming up stories. He now lives in Gloucestershire, where he spends most of his time in the local library, dreaming up stories. His novel The Many Worlds of Albie Bright was named a Best Children's Book by the New York Public Library and nominated for the prestigious CILIP Carnegie Medal in the UK, as was his novel The Jamie Drake Equation. Visit Christopher online at christopheredge.co.uk and on Facebook and follow him on Twitter.
Loading...
or
Not Currently Available for Direct Purchase