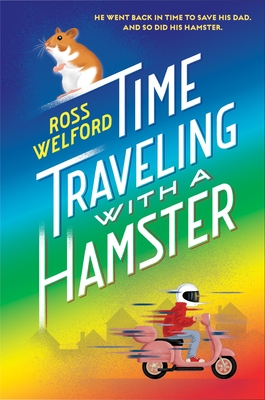 Time Traveling with a Hamster (Paperback)

Back to the Future meets The Curious Incident of the Dog in the Night-Time in this original, poignant, race-against-time story about a boy who travels back to 1984 to save his father’s life.

My dad died twice. Once when he was thirty-nine and again four years later, when he was twelve. On his twelfth birthday, Al Chaudhury receives a letter from his dead father. It directs him to the bunker of their old house, where Al finds a time machine (an ancient computer and a tin bucket). The letter also outlines a mission: travel back to 1984 and prevent the go-kart accident that will eventually take his father’s life. But as Al soon discovers, whizzing back thirty years requires not only imagination and courage, but also lying to your mom, stealing a moped, and setting your school on fire—oh, and keeping your pet hamster safe. With a literary edge and tons of commerical appeal, this incredible debut has it all: heart, humor, vividly imagined characters, and a pitch-perfect voice.

Ross Welford worked as a business journalist before becoming a freelance writer and television producer. He has worked on shows such as The Big Breakfast, The Morning, and Bridezillas. This is his first novel. Follow @rosswelford on Twitter.

Praise For Time Traveling with a Hamster…

"Nods to classic time travel stories will delight some readers; those merely looking for a page-turning adventure will find that and more."—Kirkus Reviews starred review

"In the end, Al cleverly engineers a total win, and if that seems unlikely considering the hazards of meddling with the past, readers won’t begrudge him." —Booklist starred review
or
Buy Here
Copyright © 2020 American Booksellers Association