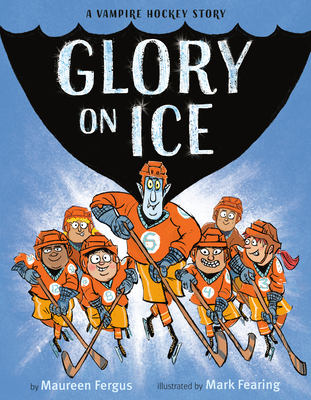 A centuries-old vampire decides to bring his crushing-and-destroying skills to the ice in this hilarious story about the newest (and oldest) member of the local peewee hockey team.

After centuries alone in his old castle, Vlad is ready to try something new. When he hears the local hockey team gushing about how they'll crush and destroy their opponents in the next game, he knows he's found the activity for him! Vlad immediately gives the game his all, but he soon realizes that super-human powers don't mean much in hockey without a mastery of the basics.

After weeks of practice, he's finally ready for the big game...but can a hundreds-of-years-old vampire really learn new tricks? This hilarious, energetic picture book encourages teamwork, perserverance, and a love of hockey that will last a lifetime, even for an immortal being.

Maureen Fergus is the author of over a dozen books for young readers. She was born in Saskatchewan and currently lives in Winnipeg with her husband, three children, and their dog, Buddy. Learn more about Maureen at MaureenFergus.com or on Facebook or Twitter at @MaureenFergus.

Mark Fearing has created award-winning editorial cartoons and animated shorts that have appeared on Nickelodeon and G4 and was a production manager for Walt Disney Television Animation. He is also the illustrator of Superhero Instruction Manual, The Three Little Aliens and the Big Bad Robot, and many other books for young readers. Visit him on the web at markfearing.com or on Twitter at @MarkFearing.
Loading...
or support indie stores by buying on