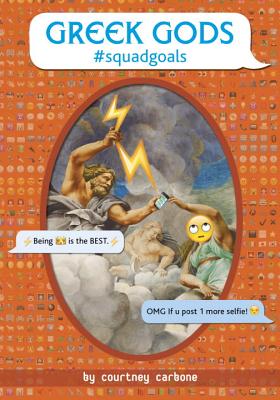 OMG Classics, the greatest stories ever told . . . in texts. Imagine: What if Mount Olympus got WiFi and the gods and goddesses had smartphones? The classic Greek myths get new life in irreverent and hilarious texts and posts!

Zeus, a king of the gods always in search of a new bae.
A squad of goddesses who can’t resist stirring the pot.
And the selfie-obsessed heroes out for all the likes.

If you have trouble telling Perseus from Theseus (#Greek2Me) or have ever wondered about Oedipus’s tragic dating profile or why Medusa’s Instagram never got traction—this satirical book of Greek myths retold for the Internet age is for you!

tl;dr D’Aulaires’ and Homer’s Greek myths told through characters texting with emojis, posting photos, checking in at locations, and updating their relationship statuses. The perfect gift for any reader—young or old—with a sense of humor!


A glossary and cast of characters are included for those who need it. For example: tl;dr means too long; didn’t read.

COURTNEY CARBONE studied English and creative writing in the United States and Australia before becoming a children’s book writer and editor in New York City. Her favorite things include Brit lit, trivia nights, board games, stand-up comedy, improv, bookstores, libraries, brick-oven pizza, salted-caramel macarons, theme parties, sharks, puns, portmanteaus, and ’90s pop culture. She is the author of more OMG Classics, such as srsly Hamlet, Macbeth #killingit, and Darcy Swipes Left. Visit her at CourtneyCarbone.com, and follow her on Twitter at @CBCarbone.
Loading...
or
Not Currently Available for Direct Purchase