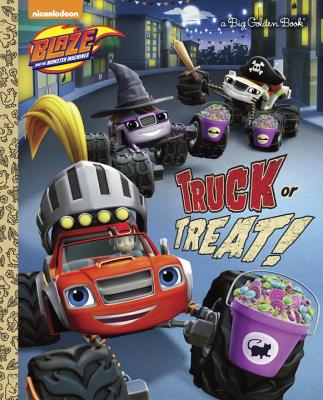 Nickelodeon’s Blaze and the Monster Machines are revved up for Halloween fun when that tricky Crusher takes everyone’s treats. Boys and girls ages 3 to 7 will thrill to this full-color Big Golden Book.

Race into action with Blaze and the Monster Machines! Preschoolers will learn about STEM (Science, Technology, Engineering, and Math) as they help Axle City’s greatest hero overcome Crusher’s cheating ways and save the day with Blazing Speed, spectacular stunts, and awesome transformations!

Jason Fruchter has been an animator and illustrator for children's media for decades. He graduated from the Rhode Island School of Design with a BFA in 1992, and later moved to New York City to work for MTV Animation. In 2001, he cofounded A&J Studios, and has worked with Cartoon Network, Disney, Nickelodeon, and Sanrio. His books include Callie’s Cowgirl Twirl, Christmas Countdown, and Alphabet Magic. He lives in Seattle, Washington.
Loading...
or support indie stores by buying on