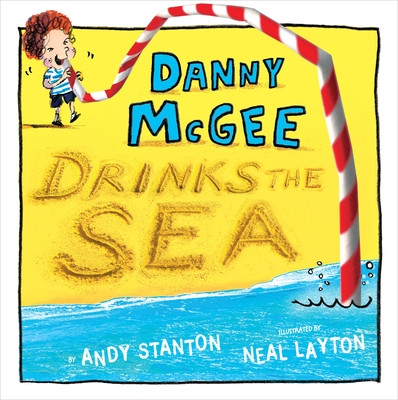 An utterly hilarious Seussian picture book—with a surprise ending—about a mischievous little boy who gobbles up everything in the whole entire world, except for one very important thing. . . .

When Danny McGee, much to his big sister Frannie's surprise, drinks up the sea with a giant straw, it turns out he's just getting started. Soon nothing is safe from getting swallowed whole by Danny McGee—not the mountains, not the trees, not even the weather girl on TV! He eats up America and all the people in the whole world (including the author, who is writing this book from inside Danny McGee!). Danny swallows the alphabet and all the numbers, until there is absolutely nothing left . . . except, of course, his big sister, Frannie McGee. Absurdist humor throughout, along with a delicious twist at the end, will have kids laughing uncontrollably at this one-of-a-kind picture book.

Praise for the work of illustrator Neal Layton:

Andy Stanton studied English at Oxford, but they kicked him out. Oh, well. He is the author of the multi-award-winning Mr. Gum books, which have sold over 1.5 million copies and have been translated into over twenty languages, so he must be doing something right. One of his books, Mr. Gum and the Dancing Bear, won the inaugural Roald Dahl Funny Prize. Andy lives in north London.

Neal Layton is an award-winning illustrator of over forty children's books, including Oscar and Arabella, which he also wrote, and That Rabbit Belongs to Emily Brown by Cressida Cowell, winner of the Smarties Gold Award in the UK. Neal has worked in a chocolate factory, in a teapot factory, and on a lettuce farm. He now lives in Portsmouth on the English coast with his family. He likes living by the seaside. Learn more at neallayton.co.uk, or follow him on Twitter @LaytonNeal.
Loading...
or support indie stores by buying on