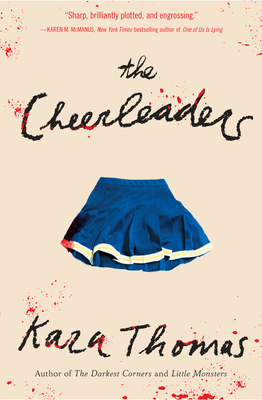 "Sharp, brilliantly plotted, and totally engrossing."--KAREN M. MCMANUS, New York Times bestselling author of One of Us Is Lying

A Goodreads Best Young Adult Book of the Year Nominee

From the author of The Darkest Corners and Little Monsters comes an all-new edge-of-your-seat thriller set in upstate New York about an eerie sequence of seemingly unrelated events that leaves five cheerleaders dead.

There are no more cheerleaders in the town of Sunnybrook.

First there was the car accident--two girls dead after hitting a tree on a rainy night. Not long after, the murders happened. Those two girls were killed by the man next door. The police shot him, so no one will ever know his reasons. Monica's sister was the last cheerleader to die. After her suicide, Sunnybrook High disbanded the cheer squad. No one wanted to be reminded of the girls they'd lost.

That was five years ago. Now the faculty and students at Sunnybrook High want to remember the lost cheerleaders. But for Monica, it's not that easy. She just wants to forget.

Only, Monica's world is starting to unravel. There are the letters in her stepdad's desk, an unearthed, years-old cell phone, a strange new friend at school. . . . Whatever happened five years ago isn't over. Some people in town know more than they're saying. And somehow, Monica is at the center of it all.

There are no more cheerleaders in Sunnybrook, but that doesn't mean anyone else is safe.

"Gripping from start to finish . . . with twists that left me shocked."--VICTORIA AVEYARD, #1 New York Times bestselling author of Red Queen

"You'll be up all night tearing through the pages."--BUSTLE

Kara Thomas has written for everything from her high school newspaper to Warner Bros. Television. She is a true-crime addict who lives on Long Island with her husband and rescue cat. She is the author of The Darkest Corners, Little Monsters, and The Cheerleaders. To learn more about Kara and her books, visit her at kara-thomas.com or follow @karatwrites on Twitter and @kara_thomas on Instagram.

Praise For The Cheerleaders…

Praise for The Cheerleaders:

“Sharp, brilliantly plotted, and totally engrossing. Every time I thought I had it figured out, the story twisted again. Kara Thomas should teach a master class in suspense.” —KAREN M. MCMANUS, New York Times bestselling author of One of Us Is Lying

“A little bit Riverdale and a little bit Veronica Mars, The Cheerleaders is a twisty page-turner that will have you doubting every character you meet—and everything you think you know.” —RILEY SAGER, bestselling author of Final Girls

"A crafty, dark, and disturbing story, but in Thomas's masterful book, the real crime is how dangerous it is to grow up female. The Cheerleaders is a riveting read."—KATHLEEN GLASGOW,  New York Times bestselling author of Girl In Pieces

“At times eerie, exciting, and even frightening…this deliciously deceptive thriller and provocative drama is a must-have.”—SLJ

“Keeping the audience guessing until the very end…[The Cheerleaders is a] satisfying, whodunnit with a solution as complicated as its premise.”—Kirkus Reviews

“Thomas builds her novel around an appealingly gruesome case…beset by herrings, and it keeps the pace moving at a solid clip….A solid pick for mystery fans.”—Booklist

"An intense psychological thriller that all but ensures the lights will be left on between dusk and dawn."-Publishers Weekly
"Gritty and realistic...this mystery will leave readers in awe."-VOYA

"A twisted story of obsession and manipulation, Little Monsters captivated me right up to its surprising conclusion—and left me wondering how well I really know my friends."-CHELSEA SEDOTI, author of The Hundred Lies of Lizzie Lovett

"Gripping from start to finish, The Darkest Corners took me into an underbelly I didn't know existed, with twists that left me shocked and racing forward to get to the end."-VICTORIA AVEYARD, #1 New York Times bestselling author of Red Queen

“As dark as Gillian Flynn and as compulsive as Serial…Kara Thomas’s mystery debut is intricate, chilling, and deeply compelling. Unforgettable!”—LAURA SALTERS, author of Run Away

"Strong character development and thrilling reveals…this novel is a sure bet."—SLJ
or support indie stores by buying on
Copyright © 2020 American Booksellers Association