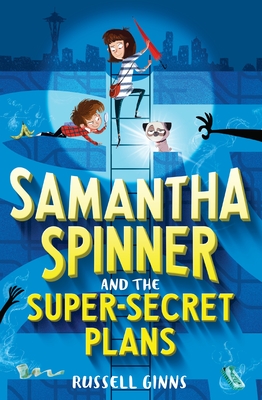 Samantha Spinner and the Super-Secret Plans

“Samantha Spinner feels somewhat slighted when from her (now missing) uncle her sister receives $2,400,000,000, her brother is given the New York Yankees, and all Samantha gets is a ratty, rusty, red umbrella. But when the umbrella is revealed to contain a map with secret passageways throughout the entire world, Samantha feels very, very lucky, indeed. Clever, smart, and sometimes a bit silly, this fun mystery from game designer Russell Ginns also includes a few extra secrets for the especially inquisitive mind.”
— Angie Tally, The Country Bookshop, Southern Pines, NC
View the List

Get ready for round-the-world adventure with Sam Spinner and her brother Nipper in the first book in a new hilarious, puzzle-packed series filled with super-secret messages! Perfect for fans of Escape From Mr. Lemoncello's Library and classics like Holes.

Samantha Spinner's uncle Paul disappeared, and here's what he left:
* Samantha's sister got a check for $2,400,000,000.
* Samantha's brother got the New York Yankees.
* And Samantha got a rusty red umbrella with a tag hanging off its worn handle. The tag says "Watch out for the RAIN."

Thanks a lot, Uncle Paul.

After all the strawberry waffles, stories, and puzzles they've shared, how could he just leave without saying goodbye? And what is the meaning of that mysterious message?

The answer is simple. Sam knows in her heart that Uncle Paul is in danger. And if he taught her anything, it's that not everything is exactly what it seems. Which is why we should pay close attention to that rusty red umbrella, and never trust a monkey at a hula-hoop contest.

The RAIN is coming and Samantha Spinner is about to find herself mixed up in some super-important, super-dangerous, super-secret plans.

Praise for Samantha Spinner and the Super Secret Plans:

"Full of adventure and survival,...[and with] characters [that] are likable, realistic, and well rounded...[Samantha Spinner and the Super Secret Plans is] great for [readers of] series like The 39 Clues." --School Library Journal

Praise For Samantha Spinner and the Super-Secret Plans…

Praise for the Samantha Spinner Series:

“Full of adventure and survival, [Samantha Spinner and the Super-Secret Plans is] great for [readers of] series like The 39 Clues.” —School Library Journal

"Appealing fare for kids who enjoy zany adventure tales with side helpings of historical/geographical trivia and wacky humor.” —Booklist

Russell Ginns is a writer and game designer who specializes in puzzles, songs, and smart fun. He has worked on projects for a wide variety of organizations and publications, including Sesame Workshop, Nintendo, Scientific American, and the Girl Scouts of America. Russell lives and writes in Washington, DC. To learn more about him, visit russellginns.com and follow @rginns on Twitter.
Loading...
or
Not Currently Available for Direct Purchase