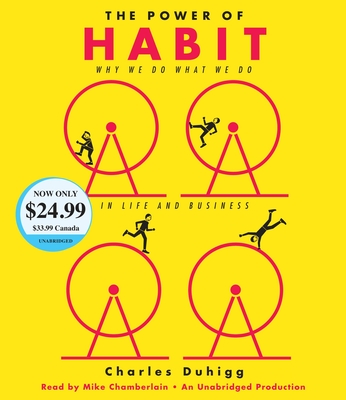 NEW YORK TIMES BESTSELLER • For anyone looking to rebuild old habits, form new ones, or start all over, this instant classic “masterfully combines cutting-edge research and captivating stories to reveal how habits shape our lives and how we can shape our habits” (Daniel H. Pink, author of Drive).

In The Power of Habit, award-winning business reporter Charles Duhigg takes us to the thrilling edge of scientific discoveries that explain why habits exist and how they can be changed. Distilling vast amounts of information into engrossing narratives that take us from the boardrooms of Procter & Gamble to the sidelines of the NFL to the front lines of the civil rights movement, Duhigg presents a whole new understanding of human nature and its potential.

At its core, The Power of Habit contains an exhilarating argument: The key to exercising regularly, losing weight, being more productive, and achieving success is understanding how habits work. As Duhigg shows, by harnessing this new science, we can transform our businesses, our communities, and our lives.

Praise for The Power of Habit


Praise For The Power of Habit: Why We Do What We Do in Life and Business…

Charles Duhigg is a Pulitzer Prize–winning investigative journalist and the author of The Power of Habit and Smarter Faster Better. A graduate of Harvard Business School and Yale College, he is a winner of the National Academies of Sciences, National Journalism, and George Polk awards. He writes for The New Yorker, The New York Times Magazine, and other publications, and is the host of the podcast How To! with Charles Duhigg.
Loading...
or
Not Currently Available for Direct Purchase