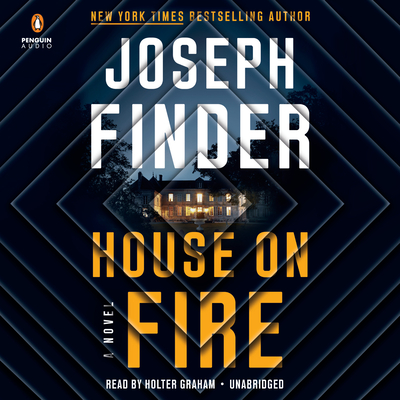 The woman is the daughter of a pharmaceutical kingpin worth billions. Now she wants to become a whistleblower, exposing her father and his company for burying evidence that its biggest money-maker was dangerously addictive. It was a lie that killed hundreds of thousands of people, including Sean.

All Nick has to do is find the document that proves the family knew the drug’s dangers. But Nick soon realizes that the sins of the patriarch are just the beginning.

Beneath the surface are barely concealed cabals and conspiracies: a twisting story of family intrigue and lethal corporate machinations. In a deadly game of chess that pits Nick against a family dynasty, against brothers and sisters with schemes of their own, Nick learns how far his enemy is willing to go to protect its name and its wealth.

“Joseph Finder brings back his Nick Heller character after a brief hiatus with smashing (literally!) results in House on Fire… Packed with both brains and brawn, House on Fire is thriller writing at its very best, conjuring tomorrow’s headlines instead of ripping off today’s.”—Jon Land for Providence Journal

“One of the Best Books of the Week... Private investigator Nick Heller has just gotten some bad news: His old Army buddy Sean died of an overdose. At the funeral, Heller is approached by the daughter of a pharmaceutical kingpin who has made millions off of dangerously addictive opioids. Now she wants to become a whistleblower.”—New York Post

“Finder is a master of the narrow escape…Finder’s characterization of Heller gets more layered with every installment. The way Heller moves through the mystery, using social skills, street smarts, and technology to get in and out of trouble, is breathtaking. Excruciating suspense.”—Booklist

“Nick Heller is back, and all feels right in the thriller world because of it. Finder’s last Heller book, Guilty Minds, remains one of my favorite thrillers ever written...and even I have to admit, this one might be better. Even if you haven’t read the first three books in the series, you can jump in here without missing a beat.”—Real Book Spy

“Finder utilizes his extensive research abilities with current events to make House on Fire yet another winner in this series…Fans of financial thrillers and private-eye fiction will find much to love here.”BookReporter.com

“House on Fire is a fast-paced thriller with a plot that could be torn from today's - or tomorrow's - newspaper headlines….Unexpected plot twists abound; the author uniquely explores complex family intrigue from highly contrasting perspectives.”—Ray Walsh, Lansing State Journal

JOSEPH FINDER is the New York Times bestselling author of fifteen previous novels, including Judgment, The Switch, Guilty Minds, The Fixer, and Suspicion. Finder's international bestseller Killer Instinct won the International Thriller Writers' Thriller Award for Best Novel of 2006. Other bestselling titles include Paranoia and High Crimes, which both became major motion pictures. He lives in Boston.
Loading...
or
Not Currently Available for Direct Purchase