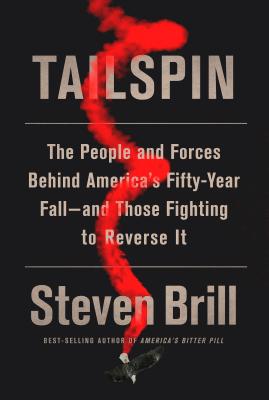 In this revelatory narrative covering the years 1967 to 2017, Steven Brill gives us a stunningly cogent picture of the broken system at the heart of our society. He shows us how, over the last half century, America’s core values—meritocracy, innovation, due process, free speech, and even democracy itself—have somehow managed to power its decline into dysfunction. They have isolated our best and brightest, whose positions at the top have never been more secure or more remote.

The result has been an erosion of responsibility and accountability, an epidemic of shortsightedness, an increasingly hollow economic and political center, and millions of Americans gripped by apathy and hopelessness. By examining the people and forces behind the rise of big-money lobbying, legal and financial engineering, the demise of private-sector unions, and a hamstrung bureaucracy, Brill answers the question on everyone’s mind: How did we end up this way? Finally, he introduces us to those working quietly and effectively to repair the damages. At once a diagnosis of our national ills, a history of their development, and a prescription for a brighter future, Tailspin is a work of riveting journalism—and a welcome antidote to political despair.

Praise For Tailspin: The People and Forces Behind America's Fifty-Year Fall--and Those Fighting to Reverse It…

“Persuasive, bracing . . . an essential read if you want to understand the pressures that have brought a sclerotic Uncle Sam to his knees." —Alexander C. Kafka, Los Angeles Review of Books

“Tailspin distinguishes itself within the America Gone Wrong genre . . . All of the book’s chapters on the law crackle with energy . . . In a downbeat era, Tailspin offers some modest ammunition for hope.” —Daniel W. Drezner, The New York Times Book Review

"Steven Brill's Tailspin does precisely what the daily torrent of news does not: make sense. The book is nothing less than a unified (and persuasive) theory of everything—including politics, business, culture—and it even includes several glimmers of hope amid the pervasive darkness." —Jeffrey Toobin, author of American Heiress

“A penetrating and personal examination of why the United States is in the midst of a nervous breakdown. But with his fantastically reported story, Brill also shows how—and who—might restore some common sense and equilibrium.” —Bob Woodward

“A compelling story . . . The fact that America’s best values and ideas, in Brill’s estimation, contributed to its tailspin should give us more than just momentary pause." —Paul Rosenberg, Salon

“An absolute must-read: a brilliant chronicle of the failures of America’s elite.” —Steve Hilton, host of Fox News’ The Next Revolution

“This is a book that pulses with dry intelligence and righteous anger.” —Philip Delves Broughton, The Weekly Standard

“An eye-opening and engrossing treatise representative of all that is wrong with today’s political processes.” —Library Journal (starred review)

“A dysfunctional system serving an unaccountable ruling class is wrecking America, according to this searing sociopolitical jeremiad. . . . [Brill] brings both detailed reporting and wide-ranging perspective to this insightful account of how America reached its current state.” —Publishers Weekly (starred review)

“Penetrating . . . in large part because of Brill’s skill in presenting abstruse legal and financial developments in an accessible manner. . . . [A] clarifying and invaluable overview.” —Booklist (starred review)

“Steven Brill is a remarkable journalist who has always ventured away from the herd. In Tailspin, he has identified and analyzed brilliantly the surprising pressure points where our democracy has fractured and failed over the past half-century, leading to today’s overwhelming dysfunction and cultural polarization. In uncovering what happened, Brill shows us that there may be a way back from America’s dire predicament.” —Carl Bernstein

“Steve Brill has written a book that every American should read. It faces the problems of our immediate past unflinchingly. At the same time it sees the seedlings of hope all across America. Ultimately, it reminds us that America is in the choices we make as citizens. The future is up to us.” —Bill Bradley, former U.S. senator

“Tailspin is a must read for all citizens troubled by the inequities, malfunctions and bizarre shape of our public and private sectors.” —Tom Brokaw

“Complaining about American politics has become a national pastime. But in his expertly researched new book, Steven Brill does far more than identify what’s wrong: he explains why American democracy isn’t working. And he gives us the powerful stories and surprising personalities who are feeding—and fighting—our democratic dysfunction.” —Jacob S. Hacker, Stanley B. Resor Professor of Political Science at Yale, and Co-Author, American Amnesia: How the War on Government Led Us to Forget What Made America Prosper

“Brill's perceptive analysis about how the cult of meritocracy has tragically created an entrenched elite who are determined to defend their moats—and make themselves, rather than America, "great"—should challenge us all. The analysis is meticulously detailed and sourced, building on Brill's long career in investigative journalism. However, Brill shows how groups in America are trying to fight back, in all manner of grassroots ways, making the book also a manifesto for practical change and a rallying cry for everyone who wants to rebuild America.” —Gillian Tett, author of Fool’s Gold and U.S. Managing Editor of The Financial Times

“Steve Brill has built on years of investigative journalism to produce a brilliant and powerful book on the most critical issue of our time: How did America’s core values get hijacked by a privileged class? During the past fifty years, we have undermined our basic national creed that we are a level playing field where any kid has the opportunity to build a better life. This book is not a political or ideological screed. Instead, it’s a model of deep reporting and fact-driven analysis. Everyone, left and right and center, should read it. It will open your eyes and challenge your assumptions.” —Walter Isaacson, author of Leonardo da Vinci

“A compelling, surprising narrative about the unlikely people and forces responsible for the dashing of the American dream—and an uplifting look at those working to restore it.” —Jill Abramson, former executive editor, The New York Times

STEVEN BRILL has written for The New Yorker, Time, The New York Times Magazine, Esquire, New York, and Fortune. He founded and ran Court TV, The American Lawyer magazine, ten regional legal newspapers, and Brill's Content magazine. Brill was the author of Time's March 4, 2013, special report "Bitter Pill: Why Medical Bills Are Killing Us," for which he won the 2014 National Magazine Award for Public Interest, and the 2015 bestseller America's Bitter Pill. He has regularly appeared as an expert analyst on NBC, CBS, and CNN. He teaches journalism at Yale, where he founded the Yale Journalism Initiative to enable talented young people to become journalists. In 2018, he cofounded NewsGuard, which rates the legitimacy of online news sites. He lives in New York City.
Loading...
or
Not Currently Available for Direct Purchase