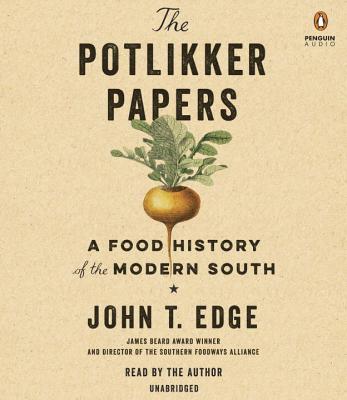 THE POTLIKKER PAPERS tells the story of food and politics in the South over the last half century. Beginning with the pivotal role of cooks in the Civil Rights movement, noted authority John T. Edge narrates the South's journey from racist backwater to a hotbed of American immigration. In so doing, he traces how the food of the poorest Southerners has become the signature trend of modern American haute cuisine. This is a people's history of the modern South told through the lens of food.

Food was a battleground in the Civil Rights movement. Access to food and ownership of culinary tradition was a central part of the long march to racial equality. THE POTLIKKER PAPERS begins in 1955 as black cooks and maids fed and supported the Montgomery Bus Boycott and it concludes in 2015 as a Newer South came to be, enriched by the arrival of immigrants from Lebanon to Vietnam to all points in between.

Along the way, THE POTLIKKER PAPERS tracks many different evolutions of Southern identity --first in the 1970s, from the back-to-the-land movement that began in the Tennessee hills to the rise of fast and convenience foods modeled on Southern staples. Edge narrates the gentrification that gained traction in North Carolina and Louisiana restaurants of the 1980s and the artisanal renaissance that reconnected farmers and cooks in the 1990s and in the 00s. He profiles some of the most extraordinary and fascinating figures in Southern food, including Fannie Lou Hamer, Colonel Sanders, Edna Lewis, Paul Prudhomme, Craig Claiborne, Sean Brock, and many others.

Like many great provincial dishes around the world, potlikker is a salvage food. During the antebellum era, masters ate the greens from the pot and set aside the left-over potlikker broth for their slaves, unaware that the broth, not the greens, was nutrient-rich. After slavery, potlikker sustained the working poor, black and white. In the rapidly gentrifying South of today, potlikker has taken on new meanings as chefs have reclaimed the dish.

Over the last two generations, wrenching changes have transformed the South. THE POTLIKKER PAPERS tells the story of that change--and reveals how Southern food has become a shared culinary language for the nation.

Praise For The Potlikker Papers: A Food History of the Modern South…

“Long one of the key voices in the discussion of Southern cuisine, Edge challenges the accepted narrative…  [and] watch[es] the momentum build until the South comes into its own.”—New York Times Book Review

“Edge is an ecumenist when it comes to such culinary crises, and that’s what makes him so wonderful a surveyor of the last 50 years of southern history…Decade by decade, Edge shows that we aren’t just what we eat; we are where that food was grown, how it was cooked, who cooked it, and who all gets to eat it with us.” —The New Republic

“To read “Potlikker” is to understand modern Southern history at a deeper level than you're used to. not just a history of Southern food; it also stands as a singularly important history of the South itself.” —The Bitter Southerner

“Edge, director of the Southern Foodways Alliance at the University of Mississippi, uses food as a lens to explore Southern identity, seeking to reconcile a legacy of slavery and Jim Crow with who claims the Southern table today.” — NPR

“A panoramic mural of the South’s culinary heritage, illuminating the region’s troubled place at the American table and the unsung role of cooks in the quest for social justice.” —O, The Oprah Magazine

“In dense detail, this book ranges fluently over the politics, drama and romance of Southern foodways.”— Nashville Scene

“A legitimate coup. The book traces the culinary and social history of food in the American South—and doesn’t pull any punches about our country’s past or present.” —Paste

“You’ll be hard-pressed to find a more complete take on the South’s complicated culinary legacy and its impact on the nation.” —Wine Enthusiast’s Favorite Books of 2017

“An insightful, refreshing, and at times revealingly ugly examination of food and its place in the South…In the evolving story of Southern food, The Potlikker Papers is a must-read force for good.”—Charleston City Paper

“Like sitting down to a bountiful Sunday Southern dinner. Edge uncovers the rich narratives that lie beneath Southern food, illustrating the tangled and compelling webs of politics and social history that are often served up alongside our biscuits and gravy… Edge’s delightful and charming book invites us to pull up a chair for a satisfying repast of tales that illustrate that the food history of the modern South reveals the dynamic character of Southern history itself.” --BookPage

“[Edge] has created a canon of Southern food writing that follows in the tradition of legends like John Egerton and Vertamae Grosvenor. The Potlikker Papers is an extension of this cultural plumbing of the South and its meaning in modern America... Edge asks us to consider how we, as Americans, active and passive Southerners, journalists, and eaters, can begin to set the record straight in this very moment—to tell the histories of those living and working in the South with truth and humanity. To recognize them and say their names.”—Saveur.com

“Masterful…When it comes to chronicling Southern food, John T. Edge puts his motor where his mouth is, logging many thousands of miles over the years to illuminate these hidden corners of the region’s cuisine like no other…Edge expertly sieves through decades of cultural influences to explore how today’s rich culinary tradition emerged.”—Garden & Gun

“The one food book you must read this year…No matter the subject, there is always something to learn from Edge’s work...The Potlikker Papers is a reminder of where we’ve been, how far we’ve come, and how far we still have to go.”—Southern Living

“In the South, Edge notes, food and eating intertwine inextricably with politics and social history, and he deftly traces these connections from the civil rights movement to today’s Southern eclectic cultural cuisine…In this excellent culinary history, Edge also profiles some of the South’s greatest cooks—Edna Lewis, Craig Claiborne, Paula Deen—who represent the sometimes tortured relationship between the South and its foodways.” —Publishers Weekly (starred review)


“Mixing deep scholarship, charming anecdotes, and his own extensive culinary explorations, Edge provides a chronological account by decades, starting in the 1950s…What will stick with most readers are the vignettes about specific chefs, restaurants, food producers, food marketers, politicians, celebrities, and race-based relationships…Without question, this is a book for foodies, but it is also for readers who…care deeply about regionalism, individual health, and race relations.” — Kirkus (starred review)

"The Potlikker Papers, offers the most honest, brutal, beautiful, and insightful discussion to date on the country’s most complicated cuisine—from the food that fueled the Montgomery Bus Boycott to the Mexican, Vietnamese, and other international dishes that feed the New South." — Southern Living

“What we eat tells our story. John T. Edge wonderfully tells the story, through grits, pone, and pig meat, of the ever-morphing American South—fleshing out the caricatures of Harland Sanders and Paul Prudhomme, traveling history’s through lines from the lunch-counter protests of the Civil Rights era to the latter-day flowering of pitmaster chic. So good, so fun, so thorough, so important.” – David Kamp, author of The United States of Arugula

“Is “The Potlikker Papers” a history of the South by way of food stories, or a story about Southern food by way of our history? By the time you come to the end of this rigorous volume, you’ll know that the two are indivisible. Edge has long shaped the conversation about food not only in this region but across the country through his pulpit as director of the Southern Foodways Alliance. The Potlikker Papers is his defining contribution to that conversation.” —Atlanta Journal-Constitution’s Favorite Food Writing of 2017

“There are certain writers who you just know have found the perfect form for their creative expression, and so it is with John T. Edge, our preeminent chronicler of southern food and culture. In this rich, compact history of the South through its food and cooks—from Martin Luther King’s favorite fried chicken artist in Montgomery, Georgia Gilmore, to The New York Times’s long-reigning food editor Craig Claiborne—Edge has produced a wonderful narrative of the region’s evolution on race, gender, and justice, with a light-handed knowingness at once sympathetic and critical.” --Diane McWhorter, Pulitzer Prize-winning author of Carry Me Home

"If I know anything about Southern cuisine it's because of John T. Edge. Somehow he's weaved together a story of how Southern food shaped, not only what was on the table, but American history. " -- David Chang, CEO/Founder, Momofuku

"Edge’s book means to be about food, but quickly veers into a close examination of the Deep South, before revealing itself as the smartest history of race in America in a generation." —Jack Hitt

“The Potlikker Papers takes readers on an exceptional journey through the modern American South, driven by the expressive power of food as a language and currency of place.  John T. Edge’s profound analysis of the region’s vibrant—but always contested---food cultures skillfully navigates the rough road from the civil rights movement’s bus boycotts to the vibrant culinary diversity of the contemporary South.  This work is essential reading in the American canon of foodways scholarship.” -- Marcie Cohen Ferris, author of The Edible South


“It should come as no surprise that John T. Edge would use a “salvage food” to celebrate ignored and forgotten kitchen stories. Recognizing the unrecognized is what he does. With his trademark style of compelling storytelling, Edge sets a table where everyone is welcome and every story matters — where untold histories teach new truths that challenge beliefs, while salving old wounds.  The Potlikker Papers inspirited me with renewed hope for unity not just in Edge’s beloved South but anywhere there is food to eat and people to eat it.” -- Toni Tipton-Martin, author of Blue Grass Cook Book and The Jemima Code


“Confidence is a funny thing. Without it, you may cling to poles, draw boundaries, and take aim at the other. The South never had much confidence in me, a foul mouthed, shants wearing, 1st Generation Taiwanese-Chinese-American conceived in Maryland and raised in Orlando. I left as soon as I could swearing I'd never open my heart again. I hadn't thought about it for quite some time, but then John T. boiled off the greens, discarded the nasty bits, and served me Potlikker. In it is a nutrient rich reflection on the South's past, present, and future. It gives me confidence that one day I can love the South all over again.” -- Eddie Huang, author of Fresh Off the Boat


“John T Edge has unearthed an extraordinary people’s history of the South, brilliantly told “through its most influential export: food. Like its namesake broth, THE POTLIKKER PAPERS is a concentrated, complicated account of the little-known cooks and humble community-builders who fed each other and fueled a movement for inclusion.” -- Beth Macy, author of Truevine and Factory Man

John T. Edge is a contributing editor at Garden & Gun and a columnist for the Oxford American.  In 2012, he won the James Beard Foundation's M.F.K. Fisher Distinguished Writing Award. Edge is director of the Southern Foodways Alliance at the University of Mississippi and a visiting professor in the Grady College of Journalism at the University of Georgia. He has edited or written more than a dozen books, including The Potlikker Papers: A Food History of the Modern South. Edge has served as culinary curator for the weekend edition of NPR's All Things Considered, has been a columnist for the New York Times, and now hosts the broadcast television show TrueSouth on SECNetwork/ESPN. He lives in Oxford, Mississippi, with his son, Jess, and his wife, Blair Hobbs.
Loading...
or
Not Currently Available for Direct Purchase