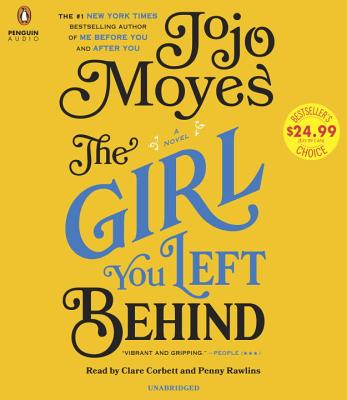 The Girl You Left Behind

From the New York Times bestselling author of The Giver of Stars, a sweeping bestseller of love and loss, deftly weaving two journeys from World War I France to present day London.

Paris, World War I. Sophie Lefèvre must keep her family safe while her adored husband, Édouard, fights at the front. When their town falls to the Germans, Sophie is forced to serve them every evening at her hotel. From the moment the new Kommandant sets eyes on Sophie’s portrait—painted by her artist husband—a dangerous obsession is born.

Almost a century later in London, Sophie’s portrait hangs in the home of Liv Halston, a wedding gift from her young husband before his sudden death. After a chance encounter reveals the portrait’s true worth, a battle begins over its troubled history and Liv’s world is turned upside all over again.

Praise For The Girl You Left Behind: A Novel…

"Jojo Moyes builds on her strengths in this moving and accomplished new novel. As she did in the best-selling Me Before You, she asks readers to think in fresh ways about a morally complex issue. . . . The Girl You Left Behind is strong, provocative, satisfying fiction."
—The Washington Post

Jojo Moyes is the #1 New York Times bestselling author of The Giver of Stars, Still Me, Paris for One and Other Stories, After You, One Plus One, The Girl You Left Behind, Me Before You, The Last Letter from Your Lover, The Horse Dancer, Silver Bay, The Ship of Brides, and The Peacock Emporium. The Last letter From Your Lover will be released as a major motion picture by Netflix in July. She lives with her husband and three children in Essex, England.
Loading...
or
Not Currently Available for Direct Purchase