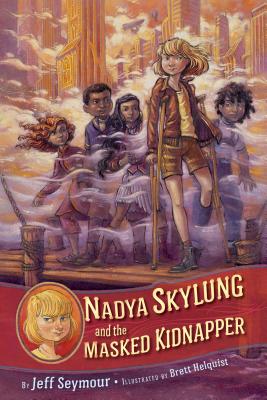 Nadya Skylung and the Masked Kidnapper

In this middle-grade sequel to Nadya Skylung and the Cloudship Rescue, author Jeff Seymour and bestselling illustrator Brett Helquist deliver another breathtaking fantasy adventure, starring an extraordinary heroine and set in an unforgettable world where ships can fly.

Nadya Skylung paid a high price when she defeated the pirates on the cloudship Remora: She lost her leg. But has she lost her nerve too? When Nadya and the rest of the crew of the cloudship Orion reach the port of Far Agondy, they have a lot to do, including a visit to Machinist Gossner's workshop to have a prosthetic made for Nadya. But though the pirates are far away across the Cloud Sea, Nadya and her friends are still not safe. A gang leader called Silvermask is kidnapping skylung and cloudling children in Far Agondy. When Nadya's friend Aaron is abducted, Nayda will stop at nothing to save him and the other missing kids, and put a stop to Silvermask once and for all.

Praise For Nadya Skylung and the Masked Kidnapper…

"In this second series installment, Seymour delivers more danger, new characters, and a journey of self-discovery. Helquist's occasional full- and double-page spreads give life to the more action-packed sequences, but this volume deals too with the repercussions of Nadya's actions and her emotional struggles as she learns what it means to be a hero." --Booklist

"Seymour paints a realistic picture of Nadya's adjustment to the loss of her leg; even her can-do optimism sags as she contemplates the reality of living without it... An action- and machine-filled follow-up for fans of the first novel." --Kirkus Reviews

"Nadya Skylung fans have been waiting for this!" --School Library Connection

Jeff Seymour is the author of Nadya Skylung and the Cloudship Rescue. In addition to writing speculative fiction, he works as a freelance editor. Jeff lives an unexpectedly hectic life with his wife, their son, and two energetic cats. Visit him online at jeff-seymour.com and on Twitter at @realjeffseymour.

Brett Helquist has illustrated many books for children, including the bestselling A Series of Unfortunate Events by Lemony Snicket. He lives with his family in Brooklyn, New York. Learn more at bretthelquist.com and on Twitter at @BHelquist.
Loading...
or
Not Currently Available for Direct Purchase