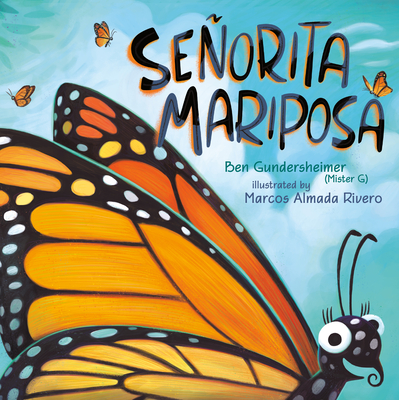 A captivating and child-friendly look at the extraordinary journey that monarch butterflies take each year from Canada to Mexico; with a text in both English and Spanish.

Rhyming text and lively illustrations showcase the epic trip taken by the monarch butterflies. At the end of each summer, these international travelers leave Canada to fly south to Mexico for the winter--and now readers can come along for the ride! Over mountains capped with snow, to the deserts down below. Children will be delighted to share in the fascinating journey of the monarchs and be introduced to the people and places they pass before they finally arrive in the forests that their ancestors called home.

“A bilingual love poem of admiration and respect for the millions of monarch butterflies that journey south to Mexico every year. . . . Almada Rivero's warm and friendly illustrations showcase the various people and animals the monarch encounters in its 3,000-mile journey. . . . Gundersheimer's recounting of the lepidoptera's journey is told in a bilingual poem. . . . Like the butterfly traveling south and north, the languages switch prominence, displaying in the larger font the principal—and rhyming—language in each spread. . . . Backmatter includes facts on the round trip the butterflies undertake, the ‘super generation’ that makes the trek south, and a call to action to protect the monarchs as they slowly lose their habitats. Uplifting and inspiring of further research.”—Kirkus Reviews

“The verses are loosely structured as moving along with the butterflies, where the bold curvilinear black font of the text calls to mind the movement of the butterfly. . . . The text is set to simple verses where the rhyming structure provides a sense of unity and an auditory element that will engage preschoolers during storytime. Kindergartners will also enjoy the digitally made art that brings to life the narrative with emotionally expressive animals and children. The back matter contains Author’s Notes referring briefly to the monarchs’ journey, their contribution to the planet, and their struggles with climate change. A playful picture book . . . that could be used to foster consciousness about protecting the planet and to explain migration and the role of butterflies in pollination.”—School Library Journal

A former teacher with a Masters of Education, Ben Gundersheimer (aka Mister G) (mistergsongs.com) is a Latin GRAMMY Award winner for Best Children's Album, and has been called "a bilingual rock star" by the Washington Post and "irresistible" by People magazine. His dynamic, original music has won praise from the Boston Globe, Chicago Sun Times, New York Post, and Parents magazine. He tours internationally headlining major venues in cities including New York City, Philadelphia, Washington DC, Austin, Los Angeles, Chicago, and New Orleans. Senorita Mariposa is his first picture book, based on a song on his album Chocolalala. He lives in Whately, Massachusetts.

Marcos Almada Rivero (marcosalmadailustrador.blogspot.com) has written and illustrated several Spanish picture books, including the Oscar the Opossum series, and created the artwork for Ben Gundersheimer's albums. He has degrees in communication (specializing in audiovisual media and animation) and children's literature, and works on animation projects as a writer, illustrator, art director, and animator. He lives in Mexico, where he leads workshops on books and animation at book fairs, movie festivals, and for children in underserved communities.
Loading...
or support indie stores by buying on