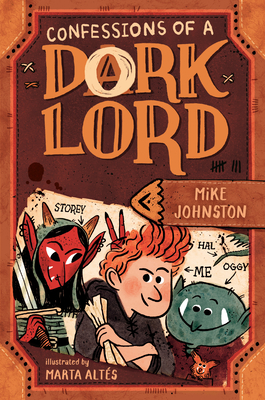 Confessions of a Dork Lord

Despicable Me meets Diary of a Wimpy Kid in this hilarious illustrated middle grade adventure that follows a hapless warlock-in-training as he struggles to live up to his great and terrible destiny.

Meet Wick. He's the son of the Dark Lord, heir to the throne of black and broken glass, and next in line to be the leader of the Grim World. Too bad he's stuck in Remedial Spell Casting (he can barely even cast the fart-revealer spell), he's allergic to fire and brimstone, and the bullies at school insist on calling him Dork Lord.

Full of humor, hijinks, and lively illustrations, Confessions of a Dork Lord follows Wick through the pages of his journal as he comes up with a genius plan to defeat his foes, achieve greatness . . . and survive Middle Ages School.

"I loved every page, and your kid will too!" --Melissa de la Cruz, bestselling author of the Descendants series

"It's not easy being bad. But this book will give you a head start." --Pseudonymous Bosch, bestselling author of the Secret series

"Hilarious! Not to be missed!" --Eoin Colfer, bestselling author of the Artemis Fowl series

Praise For Confessions of a Dork Lord…

“Vomiting frost giants, dragons with literal dragon breath (phew!), and a toilet in the sky. I loved every stinky page and your kid will too!” —Melissa de la Cruz, bestselling author of the Descendants series

“It’s not easy being bad. But this book will give you a head start.” —Pseudonymous Bosch, bestselling author of the Secret series

“Hilarious! Confessions of a Dork Lord is not to be missed! It is very rare to find a totally original book, stuffed with great characters, wrapped in a thrilling storyline. Fantasy fans will love it. Non-fantasy fans will be converted.” —Eoin Colfer, bestselling author of the Artemis Fowl series

As a child and a teen, Michael Johnston was an avid reader of science fiction and fantasy. And when he wasn't reading, he was busy playing Dungeons and Dragons, which is basically still a lot of reading. He was the original Dork Lord, but was not yet ready to embrace that fate. Instead, he studied architecture and ancient history and worked as an architect in New York City and Los Angeles, but he never gave up on his dream of writing a book about a young Dark Lord. Confessions of a Dork Lord is his first novel for children. He lives with his wife and daughter in Los Angeles.

Marta Altés is the author and illustrator of many books for children, including the picture books My Grandpa, Little Monkey, and Five More Minutes. She received her MA in children's book illustration at the Cambridge School of Art, and she lives in London. Learn more at marta-altes.com or follow her on Instagram @martaltes
Loading...
or support indie stores by buying on