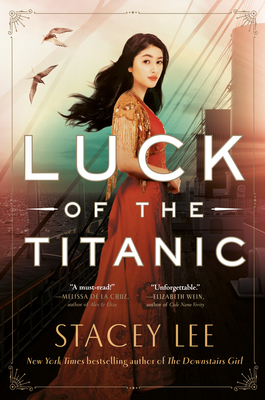 Luck of the Titanic

From the New York Times bestselling author of The Downstairs Girl comes the richly imagined story of Valora and Jamie Luck, twin British-Chinese acrobats traveling aboard the Titanic on its ill-fated maiden voyage.

Valora Luck has two things: a ticket for the biggest and most luxurious ocean liner in the world, and a dream of leaving England behind and making a life for herself as a circus performer in New York. Much to her surprise though, she's turned away at the gangway; apparently, Chinese aren't allowed into America.

But Val has to get on that ship. Her twin brother Jamie, who has spent two long years at sea, is there, as is an influential circus owner, whom Val hopes to audition for. Thankfully, there's not much a trained acrobat like Val can't overcome when she puts her mind to it.

As a stowaway, Val should keep her head down and stay out of sight. But the clock is ticking and she has just seven days as the ship makes its way across the Atlantic to find Jamie, perform for the circus owner, and convince him to help get them both into America.

Then one night the unthinkable happens, and suddenly Val's dreams of a new life are crushed under the weight of the only thing that matters: survival.

Praise For Luck of the Titanic…

“Lee gives life to the young women of the Chinese diaspora, writing them back into the story . . . So rich and focused are [Val's] schemes that as a reader, it's very easy to get caught up in them, and forget that before long, the only thing that will matter is the icy depths of the Atlantic.” —NPR

“Lovingly rendered, Val’s bittersweet story is one of hope, courage and the fight to survive.” —Ms. Magazine

“Historical romance fans will love Luck of the Titanic.” —Bustle

* “A finely crafted historical exploration of identity, class, and family that resonates through the present.” —Publishers Weekly, starred review

* “With a compassionate, strong heroine and a diverse cast, this is an exciting, important retelling of the Titanic tragedy.” —School Library Journal, starred review

* “Lee’s conversational style adds a freshness to the historical frame and achieves a thrilling balance between hope and anguish through budding romances and humor amid the looming tragedy.” —Booklist, starred review

“Thrilling . . . Lee seamlessly weaves fact and fiction in Luck of the Titanic, inventing a story that gorgeously captures an era and a tragedy. ” —Shelf Awareness

“[A] lushly imagined, compelling novel . . . A compelling romance adds to the poignancy of the finale.” —Buffalo News

“Mesmerizing . . . An admirable and engaging addition to the annals of fictional Titanic lore.” —BookPage

“Gives readers a picture of the vast differences in the experiences of the classes aboard the ship . . . Run-ins with various historical figures will receive appreciative nods from kids in the know . . . Devastating.” —The Bulletin of the Center for Children's Books

“This is the kind of book I absolutely love. Heroism and heartbreaking tragedy, seen through the eyes of those who have been left off the pages of our history books.” —Jamie Ford, New York Times bestselling author of Hotel on the Corner of Bitter and Sweet

“Stacey Lee has done it again—taken a fascinating slice of history and transformed it into a story lush with heart, heartache, and hope. This is the Titanic story you need.” —Marie Lu, #1 New York Times bestselling author of Skyhunter

“Stacey Lee’s superpower is her ability to turn history’s forgotten into today’s unforgettable; and you’ll never forget the terror and joy of travelling with Valora Luck, whose unsinkable spirit gleams like a rescue flare through the icy murk of the past.” —Elizabeth Wein, #1 New York Times bestselling author of Code Name Verity

“Stacey Lee has crafted one of my favorite kinds of historical reads; it’s a story that’s as thrilling as it is atmospheric and as joyful as it is heartbreaking. A masterful, gripping tale for the ages.” —Kerri Maniscalco, #1 New York Times and USA Today bestselling author of the Stalking Jack the Ripper series

“This book will make you fall in love and then fall to pieces.” —Stephanie Garber, #1 New York Times bestselling author of the Caraval series

“With a plot as tense as a walk on a tightrope and a wily heroine you’ll cheer on till the very end, Luck of the Titanic is historical fiction at its most thrilling.” —Laura Ruby, two-time National Book Award finalist and author of Bone Gap

“Stacey Lee has breathed new life and love into this iconic voyage, with all the hopes, fears, and complexities of an immigrant journey. I will never forget the courageous Valora Luck.” —Abigail Hing Wen, New York Times bestselling author of Loveboat, Taipei

“Luck of the Titanic stayed with me long after I finished the last line. It’s beautifully written, funny, and incredibly heartbreaking. Every single character is expertly drawn and mesmerizing. A sublime read.” —Isabel Ibañez, author of Woven in Moonlight