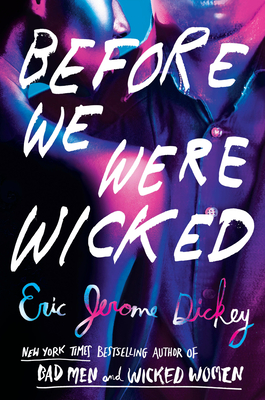 Before We Were Wicked (Hardcover)

They say the love of money is the root of all evil, but for Ken Swift, it's the love of a woman.

Ken is twenty-one, hurting people for cash to try to pay his way through college, when he lays eyes on Jimi Lee, the woman who will change the course of his entire life. What's meant to be a one-night stand with the Harvard-bound beauty turns into an explosion of sexual chemistry that neither can quit. And when Jimi Lee becomes pregnant, their two very different worlds collide in ways they never could have anticipated.

Eric Jerome Dickey is the New York Times bestselling author of more than twenty-five novels as well as a six-issue miniseries of graphic novels featuring Storm (X-Men) and the Black Panther. Originally from Memphis, Dickey now lives on the road and rests in whatever hotel will have him.

Praise For Before We Were Wicked…

Praise for Before We Were Wicked

“From wanton to wicked, the love-hate relationship between Dickey's characters burns with rapid-fire dialogue and plenty of steam.”—Kirkus Reviews

"The love story Dickey tells . . . is potent. Readers will want to read Bad Men and Wicked Women again after being immersed in this edgy, emotional adventure.”—Booklist

"A passion-filled prequel that puts a new spin on the familiar conflicts that have made him a household name."—Essence

"The tightest of novels . . . with lots of spice."--The Bookworm Sez

“Before We Were Wicked is a master's class in relationship drama. . . . A literary feast!”--Smexy Books

“Quentin Tarantino’s Pulp Fiction comes to mind as Swift and Ellis cruise through Los Angeles’s wealthy neighborhoods debating issues of racism, inner-city poverty, and the lingering effects of slavery. . . . Suspense builds with an action-packed finale, and Dickey’s many fans will eagerly consume this.”—Library Journal on Bad Men and Wicked Women

“Dickey sets in motion a fascinating cast of characters and creates compelling arcs for their stories. . . . Readers will be cheering for the kindhearted Ken and his family in this dark yet ultimately hopeful novel.”—Booklist on Bad Men and Wicked Women

“Eric Jerome Dickey is the best thing going in fiction now in terms of writing stories that blend action with sensuality. . . . Dickey’s penchant for creating fiction that resonates with the forbidden overtakes us--these elements of danger and lust dominating each and every passage. At its best moments, Bad Men and Wicked Women recalls bits and pieces of the famed HBO series The Sopranos as we come to drench ourselves in the types of secrets many families harbor but seldom share.”—Electric Review

“Dickey steadily generates a taut, deadly atmosphere throughout the book, and readers will not be able to predict who will be the last man standing.”—Booklist on Finding Gideon

“An epic story about an epic quartet [of friends].”—Essence on The Blackbirds