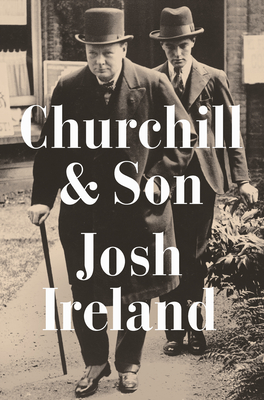 The intimate, untold story of Winston Churchill's enduring yet volatile bond with his only son, Randolph

“Ireland draws unforgettable sketches of life in the Churchill circle, much like Erik Larson did in The Splendid and the Vile.”―Kirkus • “Fascinating… well-researched and well-written.”—Andrew Roberts • “Beautifully written… A triumph.”—Damien Lewis • “Fascinating, acute and touching.”—Simon Sebag Montefiore

We think we know Winston Churchill: the bulldog grimace, the ever-present cigar, the wit and wisdom that led Great Britain through the Second World War. Yet away from the House of Commons and the Cabinet War Rooms, Churchill was a loving family man who doted on his children, none more so than Randolph, his only boy and Winston's anointed heir to the Churchill legacy.

Randolph may have been born in his father's shadow, but his father, who had been neglected by his own parents, was determined to see him go far. For decades, throughout Winston's climb to greatness, father and son were inseparable—dining with Britain's elite, gossiping and swilling Champagne at high society parties, holidaying on the French Riviera, touring Prohibition-era America. Captivated by Winston's power, bravery, and charisma, Randolph worshipped his father, and Winston obsessed over his son's future. But their love was complex and combustible, complicated by money, class, and privilege, shaded with ambition, outsize expectations, resentments, and failures.

Deeply researched and magnificently written, Churchill & Son is a revealing and surprising portrait of one of history's most celebrated figures.

“Josh Ireland has produced the most objective and balanced biography of Randolph Churchill to date.”—International Churchill Society

“Churchill & Son is a thoughtful study of a father-son relationship during the storms that rocked the 20th century…adding fresh insights and thoughtful appraisals to our understanding of the great man and his offspring.”—The American Spectator

“No matter how low Randolph's reputation plummeted, Winston's love remained undimmed and this fine book may now allow the rest of us to appreciate the younger Churchill's merits.”―The Times

“A fascinating, acute and touching portrait of Churchill and Randolph, revealing there is no greater curse than to be the son of a great man.”—Simon Sebag Montefiore, New York Times bestselling author of The Romanovs: 1613-1918 and Stalin: The Court of the Red Tsar

“In this fascinating account of the turbulent Churchill father-and-son relationship, Josh Ireland shows how central Winston and Randolph were to each other’s lives. It is notoriously hard to be the child of a great person (although Winston himself managed it), and Randolph has rarely been approached so sympathetically as in this well-researched and well-written book. It proves that whereas Randolph has been mostly remembered as an irritant on the margins of Winston's life, for many years he was a focus of his interest, pride and love.”—Andrew Roberts, New York Times bestselling author of Churchill: Walking with Destiny

“This is a revelatory portrait of an explosive relationship between a great man and his infamous son. With skill and sensitivity, Josh Ireland lays bare the anguish of their dysfunctional love.”—Jonathan Dimbleby, author of The Battle of the Atlantic: How the Allies Won the War

“A fascinating study of the family relationship beneath the most dramatic events of the twentieth century. It is the thrilling story of a man trapped between an epic sense of entitlement and the constant awareness of his own failure.”—Joshua Levine, author of Dunkirk

“Ireland draws unforgettable sketches of life in the Churchill circle, much like Erik Larson did in The Splendid and the Vile.... Tragedy as well as triumph in this meticulous, fascinating tale of three generations of Churchills.”―Kirkus

“A compelling tragedy, but one which casts valuable new light on the outsized human dimensions of both men.... Agonising but excellent.”―The Telegraph

“Students of father-son relationships will find this treatise compelling and full of eyebrow-raising anecdotes.”—Booklist

“Consistently entertaining and insightful, this deep dive will reward even the most knowledgeable Churchill buff.”—Publishers Weekly

“Highly readable.… This is a story of frustrated ambition and squandered potential. Above all, it is a study of personality. The author vividly portrays the character of Winston and Randolph, showing how their respective personalities interacted in a relationship that could be, in turn, loving and volatile. Ireland evokes this turbulence in an outstanding account.”—Winnipeg Free Press

Josh Ireland has written for the Daily Telegraph, Prospect, Spectator, and the Times Literary Supplement. He is the author of The Traitors: A True Story of Blood, Betrayal and Deceit, an account of four Britons who betrayed their country during the Second World War, published in the UK by John Murray.
Loading...
or
Not Currently Available for Direct Purchase